A little boy lost his stuffed puppy near a dog spa. So the groomers decided to give the toy a spa day. 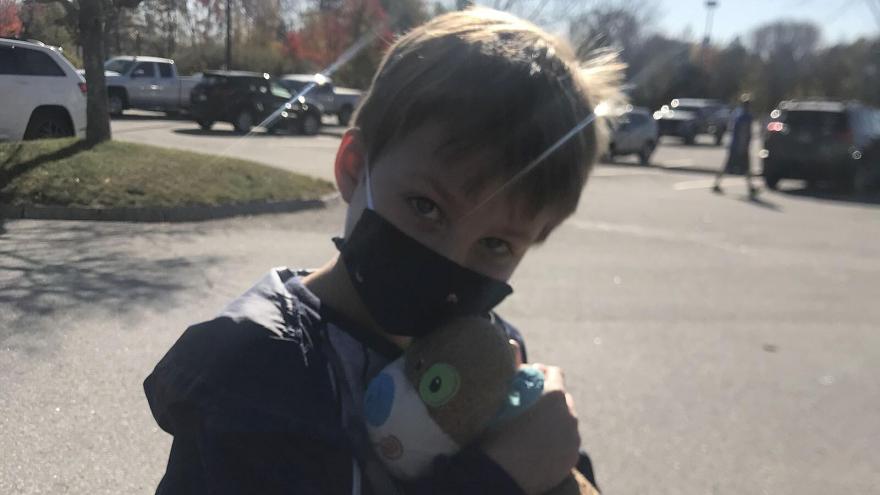 Carter Perry embraces Stuffy-puppy, a toy he has owned since he was two years old.

(CNN) -- After a 6-year-old in Maine lost his toy dog, one local groomer stepped up to help them reunite.

"PLEASE reach out if you find him," she wrote on October 10, noting "Stuffy-Puppy" was last seen on a bench between Percy's, a local restaurant, and a local barbershop.

"Thank you it's raggedy with floppy ears," Dickson added.

The restaurant happens to be adjacent to Brundage's business. So when she saw the social media post, Brundage sent a screenshot of it to her employees, asking them to check if the toy was still on the bench mentioned in the post.

As luck would have it, it was. Bri Ring, an employee of the Lavish Dog Day Spa, found the toy perched on the bench, and took it inside the spa.

Then, she and Brundage came up with an idea. They didn't want Carter to worry about his "Stuffy-Puppy" -- so they decided to pamper the toy with a spa day which included a bubble bath and a good combing.

At the end of the grooming process, Ring tied a light blue bow around the toy's neck.

She also snapped pictures of the toy and sent it to Brundage who, in turn, shared the pictures with the toy's owners.

"At the end, when he (Stuffy-Puppy) was sitting on the reception desk, I posted a picture that said, 'oh, he's all ready to be picked up, he was a good boy,'" Brundage told CNN.

The next morning, Carter and his mother, Kelly Perry, who had seen the images on Facebook, went to the spa to retrieve the toy.

Perry told CNN that her son was sad to be apart from his Stuffy-Puppy but upon their arrival at the spa, Carter couldn't contain his joy at being reunited with his toy.

Correction: A previous version of this story incorrectly reported the last name of Bri Ring.