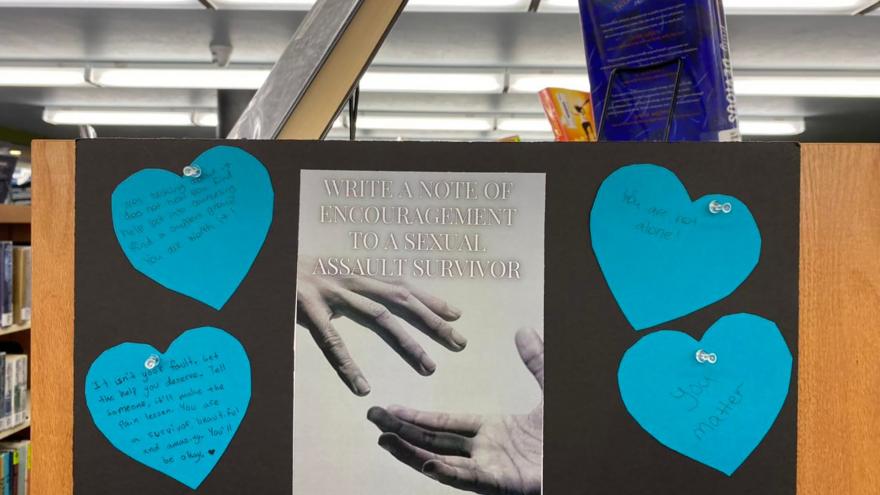 (CNN) -- A censorship battle at an Oklahoma library is calling attention to what critics say is the hypocrisy of legislative attempts to prohibit discussions and materials about LGBTQ issues.

Literary circles were up in arms after the Enid Public Library in Enid, Oklahoma, canceled a romance book club and a sexual assault awareness book display in response to the city's library board narrowly voting to ban displays and programs that featured content about sexuality.

However, the Public Library of Enid and Garfield County's Board of Directors initially said the book club and the sexual assault awareness book display could stay. According to Enid Public Library's interim director Theri Ray, library staff and city officials later nixed the projects "in accordance with the adopted policy."

"The library director is tasked with implementing the policy as written," Ray told CNN.

Though library staff have not publicly specified any motivation, literary advocates have taken their actions as commentary on how widely such a ban can be interpreted, despite originating with specifically LGBTQ content in mind.

On its surface, the policy, written by board chair Joseph Fletcher, is very general. It states that library programs and exhibits should be "non-partisan" and "will not make as their object the study of sex, sexual activity, sexual perversion, sex-based classifications, sexual preferences, sexual identity, gender identity, or subjects that are of a sexual nature."

However, Cindy Nguyen, policy director of the American Civil Liberties Union of Oklahoma, pointed out that verbiage was specifically taken from a bill that is currently halted in the state's legislature. SB 1142 proposes to ban materials discussing sexuality in classrooms -- a concept that critics see as similar to the controversial law, dubbed "Don't Say Gay" by critics, that has made headlines in Florida.

Nguyen and her team have been paying close attention to the events unfolding in Enid.

"We know it's pretty clearly linked," she told CNN.

The ties don't end there. Last summer, a Pride Month-themed display at the Enid Public Library drew outcry from several citizens, and was widely discussed at a July 2021 library board meeting.

"We do not need to bring in divisive things into a public building," one Enid resident said, according to the Enid News & Eagle. Fletcher, who eventually drafted the proposal that became the ban, reportedly said the issue was the promotion of certain topics, not access to them. (The new library policies would not require the removal of materials from the library's catalog.)

At the April 11 board meeting this year, which Nguyen and Ray attended, attendees debated what, exactly, constituted "sexuality" or "sex-based classifications."

"If we go through with this vote, there is going to be no displays ever," one board member said.

Ray said at the meetingshe would have to decide whether to include Mother's Day and Father's Day displays, for example, since the terms are technically gender- and sex-based classifications.

What's going on in this town of roughly 50,000 people may not stay local for long, Nguyen warned.

"We're expecting to see these policies pop up in legislatures across the country," she said. "Anything that can be connected to critical race theory or LGBTQ issues, there will be an attempt at chilling speech." ("Chilling speech" is a term that describes attempts to discourage First Amendment expression through vague laws or policies.)

According to a report from literary and free expression organization PEN America, conservative legislatures have enacted roughly 1,600 book bans in school districts across 26 states since July 2021. That includes 713 bans in Texas, where students and educators are currently pushing back on an investigation launched by GOP State Rep. Matt Krause into hundreds of books largely related to race and sexuality.

Nguyen said the generality of policies like the one in Enid make them particularly dangerous, because they can be enforced as broadly or as specifically as local leaders see fit. To avoid running afoul of the rules, libraries may have to decide how widely concepts like sexuality or race can be interpreted -- and what parts of those identities are most likely to be punished.