A Las Vegas public official is held on open murder charge in connection with the killing of an investigative journalist, sheriff says 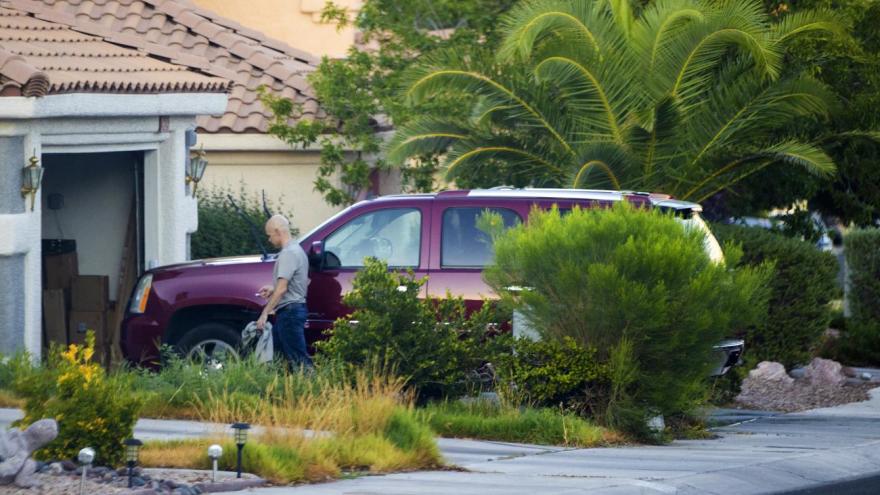 (CNN) -- An elected county official in Las Vegas is being held on a murder charge in connection with the stabbing death of a veteran journalist who had reported on the official's purported wrongdoing, a sheriff announced Thursday -- a case that raises questions about press freedom in America.

Clark County Public Administrator Robert Telles, 45, was arrested Wednesday in connection with the killing of Review-Journal reporter Jeff German, days after the reporter was found stabbed to death outside his home, officials said in a news conference, echoing earlier reports by the newspaper that cited Clark County Sheriff Joe Lombardo.

"This is a terrible and jarring homicide that has deeply impacted Las Vegas. Every murder is tragic but the killing of a journalist is particularly troublesome," Lombardo said in a news conference Thursday, offering his condolences to German's family, friends and colleagues at the Review-Journal.

"We are ... outraged that a colleague appears to have been killed for reporting on an elected official. Journalists can't do the important work our communities require if they are afraid a presentation of facts could lead to violent retribution," the newspaper's executive editor, Glenn Cook, said Wednesday in a statement.

Telles has a court appearance scheduled for Thursday afternoon, online Clark County Jail records show. CNN has reached out to the Las Vegas Metro Police Department and to Telles' office and is working to determine his legal representation.

German was discovered outside his home Saturday morning, though police believe the killing occurred a day prior.

Telles, who lost reelection in June, was identified as a person of interest early in the investigation, as authorities discovered neighborhood surveillance footage capturing a vehicle seen at Telles' house before and after German's killing, Koren said. The vehicle, registered to Telles' wife, was also seen at German's house at the time of his death.

"We ultimately developed video evidence to show that the vehicle, the GMC Denali parked in front of Telles' home departed around 9 a.m. in the morning on the day of the murder, and returned around 12 p.m. just after the murder, which matched our timeline," Koren said.

Surveillance footage released over the weekend showed a suspect wearing a straw hat and orange shirt, and investigators found a matching hat during a search of Telles' home. The hat had been cut, Koren said, as if in an effort to conceal evidence.

Investigators also discovered blood on a pair of shoes that had been cut, "likely in a manner to try to destroy evidence," Koren said. In addition, Telles' DNA matched DNA found at the crime scene, he said.

Arrest is both a 'relief' and an 'outrage' for victim's newsroom

German had been working on a story about Telles the week he was killed, according to the Review-Journal. Earlier this year, Telles was the subject of articles that detailed his oversight of his office, and German reported Telles created a hostile work environment and carried on an inappropriate relationship with a staffer.

Telles denied the reports, the Review-Journal said. First elected to the office in 2018, Telles lost his bid for reelection in a June Democratic primary.

Prior to German's death, Telles published several online posts detailing his issues with the journalist's reporting, including on his campaign's website and in a letter to German, in which he called the allegations "false" and insisted the reporter was trying "to drag me through the mud."

Telles also stated that he sought legal counsel in an effort to seek legal action against the newspaper but ultimately came to the conclusion that "suing a newspaper, like the Las Vegas Review-Journal, is near impossible."

Telles also posted several tweets regarding German and his reporting.

"Looking forward to lying smear piece #4 by @JGermanRJ. #onetrickpony I think he's mad that I haven't crawled into a hole and died," read a June 18 tweet, in part.

A few days later, Telles tweeted, "Typical bully. Can't take a pound of critism (sic) after slinging 100 pounds of BS. Up to article #4 now. You'd think he'd have better things to do."

In his own statement Wednesday, Cook, the newspaper editor, said Telles' arrest was "at once an enormous relief and an outrage or the Review-Journal newsroom."

"We thank Las Vegas police for their urgency and hard work and for immediately recognizing the terrible significance of Jeff's killing. Now, hopefully, the Review-Journal, the German family and Jeff's many friends can begin the process of mourning and honoring a great man and a brave reporter. Godspeed, Jeff."

Killings of journalists are rare in the United States, and murders of journalists in retaliation for their work even more so, according to the Committee to Protect Journalists. Eight journalists have been murdered in the US since 1992, when the non-profit began keeping track, including four in a mass shooting in 2018 in the newsroom of the Capital Gazette newspaper in Maryland, it said.

"Las Vegas police have acted quickly in identifying and arresting a suspect in the fatal stabbing of Las Vegas Review-Journal reporter Jeff German," Carlos Martínez de la Serna, program director of the Committee to Protect Journalists, said Thursday in a statement. "Authorities should ensure that all those involved in this terrible crime are identified and held to account, and should make clear that those who target journalists will face justice."

Victim's colleagues were instrumental in investigation

Early on, authorities were focused on making sure German's death wasn't linked to a burglary in addition to "looking at any work-related grievances or conflicts" related to his reporting, Koren said.

"We knew that as an investigative reporter he had written several articles and there were different allegations and statements about potential people that would be upset about it," he said.

The Review-Journal was instrumental in providing information that helped investigators, Lombardo said Thursday, particularly in outlining what "cases" German "was working previously and currently."

"We expect journalism to be open and transparent and watchdog for government. And when people take it upon themselves to create harm associated with that profession, I think it's very important that we put all eyes on it and address the case appropriately," he said, "such as we did in this case, with this expediency associated with it."

Coworkers of German reviewing Google Maps noted in Telles' driveway a maroon SUV similar in look to the photo released by authorities, said Arthur Kane, a reporter for the Review-Journal who'd worked with German.

"The police came down and roped off the area, started searching his house," Kane told CNN's Erin Burnett on Wednesday. The SUV was the one registered to Telles' wife, Kane said, and the vehicle was taken away by investigators.

In the meantime, the investigation remains ongoing, Lombardo said Thursday, and authorities are still following up on "several leads" to "put to bed other allegations."