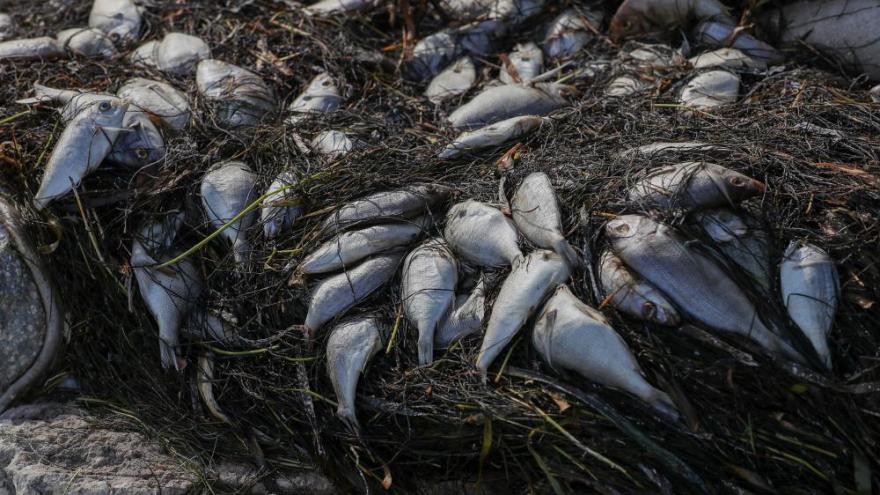 Dead fish from red tide washed up along a waterfront park in St. Petersburg, Florida, on July 9.

(CNN) -- A red tide has invaded the Gulf Coast of Florida, causing problems for wildlife and the community.

The bacteria that makes up red tide, Karenia brevis, has already killed more than 613 tons of marine life and fish in and around Tampa as of last week, according to local officials.

The Florida Fish and Wildlife Conservation Commission said Friday it had collected 132 samples from the region and found high concentrations of the bacteria in the water in Pinellas and Hillsbourgh counties.

Fish kills suspected to be related to red tide were reported in Pasco, Pinellas, Hillsborough, Manatee, Sarasota and Lee counties over the past week, according to the commission, as well as respiratory irritation in many of the same counties.

The blooms aren't necessarily red or blue green. The US Centers for Disease Control and Prevention says "blooms can look like foam, scum, mats, or paint on the surface of the water. A bloom can change the color of the water to green, blue, brown, red or another color."

"Red Tide in some parts of Tampa Bay in the past few days tested at ten to 17 times the concentration considered "high," which can cause significant respiratory issues in people as well as fish kills," Pinellas County officials said in a red tide update July 13.

Members of the Suncoast Surfrider Foundation, a non-profit that works to protect oceans and beaches, and others in the community rallied against the problem Saturday, hoping to bring their concerns to the Florida Gov. Ron DeSantis.

Thomas Paterek, chair of Suncoast Surfrider, told CNN he knew he had to do something when a friend called him in tears because of the dead fish on the beach outside of their water rental business.

"Hearing that phone call sparked a fire in me, to say if nothing is going to be happening, the community needs to lead this," Paterek said.

He said he decided to organize the rally to try to spark immediate change, including closing the nearby Piney Point wastewater reservoir and enacting a state of emergency to help clean up the waterways.

"I think everyone in the community is frustrated," he said. "When you see dead dolphins in the water, when you see dead manatees in the water, dead sea turtles ... when you have captains who have fished in the area for decades say they have never seen anything like this, that is enough to declare a state of emergency and not just say it's another naturally occurring harmful algal bloom."

Large bloom could be connected to Piney Point

Scientists feared a large bloom was imminent after the Piney Point phosphogypsum stack dumped nutrient-rich wastewater into Tampa's waters in April. The elevated concentrations of nitrogen and phosphorus were some of the most concerning descriptors because they are known to fuel phytoplankton growth which can lead to a potentially toxic algal bloom.

"While it's unlikely that we will be able to make a direct correlation between environmental harm manifested in Tampa or Sarasota Bays, it would be absurd to suggest that the impact isn't significant," Justin Bloom, founder of the Suncoast Waterkeeper environmental organization, told CNN in June.

The Florida Department of Health notes that red tides were documented in the southern Gulf of Mexico in the 1700s and along Florida's Gulf Coast since the 1840s. But the Florida Fish and Wildlife Conservation Commission says the microorganism responsible for red tide was not identified until 1946.

And although algae blooms have been recorded for hundreds of years, the Environmental Protection Agency points out: "Nutrient pollution from human activities makes the problem worse, leading to more severe blooms that occur more often."

State and federal agency maps for the summer and fall of 2018 show heavy red tide outbreaks in six counties, from Pinellas in the north to Collier in the south.