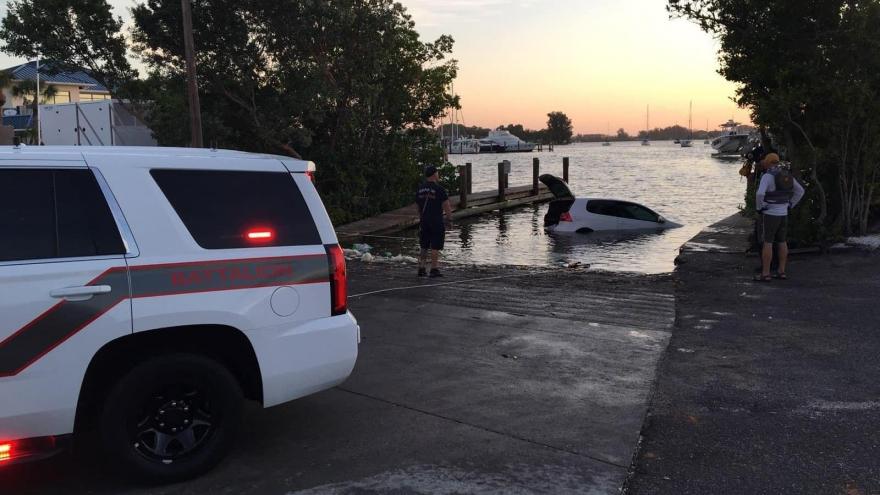 A kayaker in Florida is being hailed as a hero by police after he rescued an 81-year-old woman who was trapped inside her submerged car for hours.

(CNN) -- A kayaker in Florida is being hailed as a hero by police after he rescued an 81-year-old woman who was trapped inside her submerged car for hours.

Rob Goodman headed to Higel Marine Park in Venice, Florida, on Thursday morning to go kayaking, which he tries to do every week, he told CNN. He ran into another man, Ed Coster, a paddleboarder, and the two exchanged greetings before they went their separate ways.

It was just before daybreak when Goodman got into the water, started paddling out and spotted the top of a white vehicle partially submerged. Goodman paddled back to the dock to investigate what he saw, and then he noticed the door's window was slightly cracked, he said.

"This little hand and fingers came popping out," Goodman said. "I started calling 911 and Ed jumped into the water to try to open the door."

The two men worked on freeing the woman from the submerged vehicle and brought her to safety as they waited for emergency officials.

"She was wet and cold," Goodman said. "I held her like a baby to get some heat on her till rescue got there."

The woman, whom police didn't identify, told first responders she had been trapped in the car since around 10 p.m. Wednesday, according to police.

"The car was almost completely submerged and no way anyone would have seen it from the road," police commented on Facebook.

Goodman said once first responders were on the scene he went back out to the water to kayak.

"I saw Ed again out in the water later and said, 'Well buddy, now we know why we met,'" he said.

Venice police shared on social media images from the scene and surveillance video of the vehicle entering the water that night.

"We are pleased to see a happy ending to such a potentially tragic situation," police said in their post.

They added that the woman is in stable condition.