A Kansas dog went missing for days. Turns out, she had journeyed to her previous house in Missouri, over 50 miles away 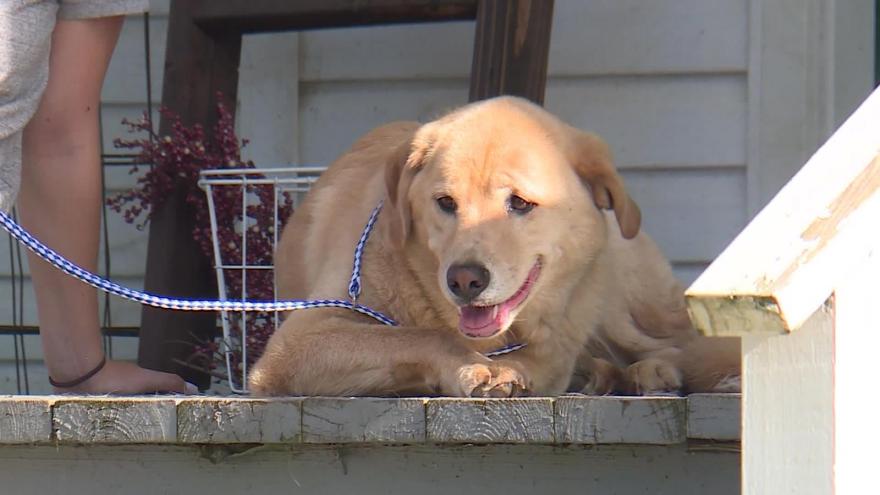 Cleo sitting on the front porch of her previous home in Lawson, Missouri.

(CNN) -- After Cleo the 4-year-old Labrador went missing, her owners found her somewhere they didn't expect: At home.

Except that it was the family's previous home in Lawson, Missouri, rather than their home in Olathe, Kansas.

The family hadn't lived in their Kansas home for nearly two years, but Cleo made her way back to its porch, where the new homeowner found her.

"My wife and I had just gotten home from work," Colton Michael, the house's new owner, told CNN. "Cleo was laying on the front porch at the front door, just laying there, waiting for somebody it seemed like."

Cleo wasn't wearing a collar, but she was too well-groomed to be a stray, Michael thought, so he had Cleo scanned for a microchip. Thankfully she had one and it pulled up the name of her owner.

"That's when my wife pointed out that their last name was the same last name as the previous owner of the house," Michael said.

So he went onto Facebook and searched the owner's name and saw that his family had posted that their dog went missing a week earlier.

"I told him that we found his dog, but once I told him where we were, he was kind of speechless," Michael recalled.

Door to door, Cleo would have had to travel 57 miles from her current home in Kansas to her previous home in Missouri, according to CNN affiliate KMBC. And neither family knows how she made the trip, considering the fact that she would have had to cross a river or a bridge rushing with heavy traffic to get to the house.

But no matter how or why she made the trip, her owner said he's just glad that he found her.

"It just feels really good to be reunited with her," Drew, Cleo's owner, told KMBC. "Really, she's everything to us."