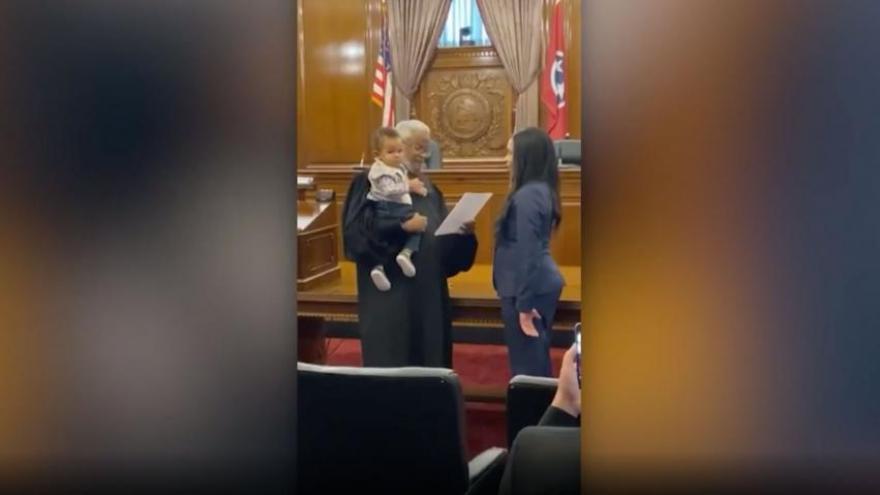 A Tennessee woman wanted to be three things in life: a wife, a mom and a lawyer. And when she was sworn in as a lawyer, her 1-year-old son was part of the whole thing -- thanks to the judge officiating the ceremony.

(CNN) -- A Tennessee woman wanted to be three things in life: a wife, a mom and a lawyer.

And when she was sworn in as a lawyer, her 1-year-old son was part of the whole thing -- thanks to the judge officiating the ceremony.

It happened last week when Juliana Lamar, 27, was being sworn in as a lawyer at the Tennessee Supreme Court in Nashville.

Her entire family was there to support her. When Judge Richard Dinkins saw her son in the crowd, he insisted the boy be part of the ceremony.

After all, Beckham had been part of her entire journey to become a lawyer.

"Just as we're about to begin, he goes to grab Beckham and says 'He needs to be part of this. He's going to do the swearing-in with me,'" Lamar recounted to CNN.

"While we were doing the swearing-in, Beckham is just sitting there with his hand up, and it was just such an amazing experience."

The journey to this moment

Lamar became pregnant halfway through law school at Belmont University College of Law, she told CNN on Monday. She was concerned how she would get to class and make it work. She worried about giving birth during a final exam or missing too many classes.

"Law school is a journey on its own for anyone, whether they're a parent or not," she said. "Law school is probably one of the hardest things that anyone can do."

She gave birth to Beckham in October 2018. She couldn't even drive herself when she returned to the classroom to work toward her degree the next day, but she wanted to make sure she wasn't missing much.

When it finally came time to be sworn in as the last step toward getting her license, her son was right there in Judge Dinkins' arms. CNN reached out to Dinkins for comment.

"To have my son who means the world to me and is the person I do everything for, to have him right there watching his mommy just was amazing," she said. "He is the guiding light in my life."

She is now working in a two-year clerkship with the state trial court and when that is over, she will start looking for other jobs.

"I hope that this story gives other young women and young mothers the inspiration to know that you can do it, even if you're faced with a crazy attendance policy or you're just worried that you can't do it," she said. "If I can do it, literally anyone can do it."