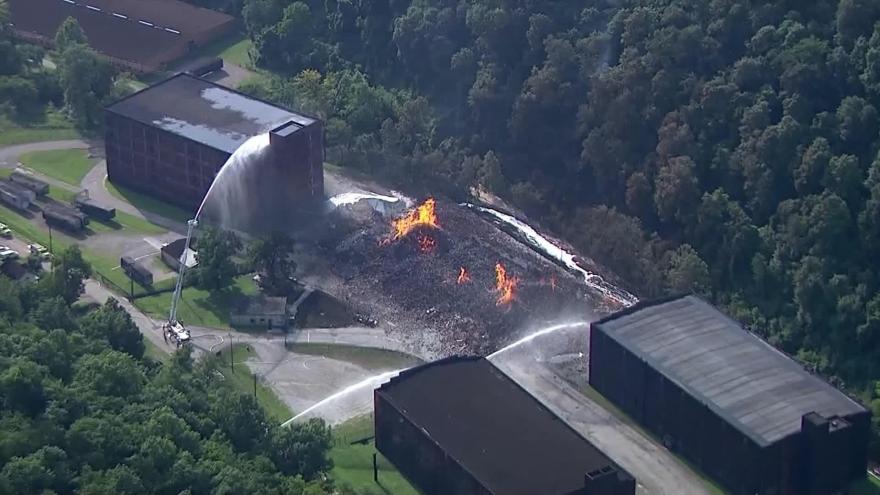 **Embargo: Louisville, Ky.** A Jim Beam warehouse caught fire late Tuesday and firefighters struggled to contain the massive blaze, partly because of alcohol in the debris.

(CNN) -- A fire at a Jim Beam warehouse in Versailles, Kentucky, was in its third day of burning on Thursday, as Kentucky officials began assessing the environmental impact the leaking bourbon was having on nearby waterways.

The warehouse caught fire Tuesday night and burned through Wednesday morning before a containment system was set up at the warehouse, John Mura, a spokesman for the Kentucky Energy and Environment Cabinet, said. He said bourbon barrels were purposely being allowed to burn off on Thursday.

The move is meant to help prevent more runoff from polluting waterways and nearby sources of drinking water, Mura said.

"We're starting to see fish kill, and we think that it's very likely to get worse," he said.

Mura added that aeration devices are being installed in Glenns Creek and the Kentucky River to reduce the number of fish dying, and that his agency was taking daily water samples to monitor oxygen levels. Officials are also continuing to monitor the smoke in case the fire reignites.

Forty firefighters from five counties helped battle the blaze. A second warehouse also caught fire, but that blaze was controlled.

The warehouse where the fire started collapsed.

The warehouse contained 45,000 barrels of "relatively young whiskey," according to a statement from Beam Suntory, the parent company of Jim Beam.

"We are thankful that no one was injured in this incident, and we are grateful to the courageous firefighters from multiple jurisdictions who brought the fire under control and prevented it from spreading," spokeswoman Emily York said in a statement provided to CNN. "Given the age of the lost whiskey, this fire will not impact the availability of Jim Beam for consumers."

Woodford County Emergency Management chief Drew Chandler said the warehouses are massive -- about the same area as a football field and six or seven stories high.

The cause of the fire has not been determined.

In 2018, about 18,000 barrels of bourbon were lost when a warehouse in Bardstown, Kentucky, collapsed during building work. The bourbon run off killed about 1,000 fish in nearby waterways.