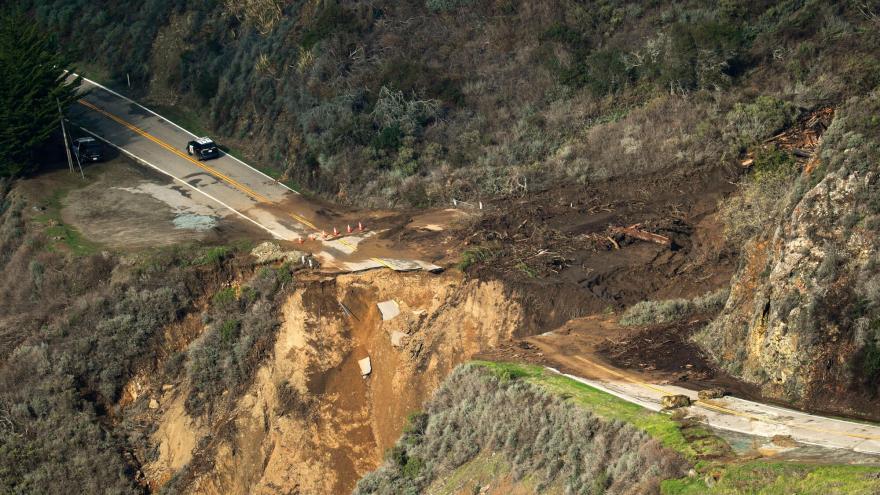 The view of Highway 1 on Friday, after a chunk of the roadway collapsed into the Pacific Ocean.

(CNN) -- A huge piece of California's Highway 1 was washed out this week by a winter storm that brought heavy rain and snow.

California Department of Transportation (Caltrans) officials said in a statement Friday a debris flow from the hillside above the roadway "overwhelmed drainage infrastructure, flowed across the highway, and eroded the road resulting in the complete loss of a segment of Highway 1" at Rat Creek, about 15 miles south of Big Sur, a mountainous stretch of the state's central coast.

California Highway Patrol Officer John Yerace said he was in the area on Thursday around 4 p.m. when he noticed "this section of roadway, specifically the southbound lane, had fallen off into the ocean."

Images and drone footage from the scene show a huge gap in the scenic highway, which runs along much of the California coast.

The damage assessment team will continue to work through the weekend, Caltrans' statement said. It's unclear how long the repair could take and the road will remain closed in the meantime.

Officer Yerace said upon discovery of the washed out road he stayed at the scene to keep motorists safe until he was relieved. He later returned.

"Some time overnight, prior to 6:30 this morning, we responded back to the scene with the assistance of Caltrans access and realized that the roadway is now gone," he said.

The area where the road collapsed is about a mile south of the burn scar left behind by the Dolan Fire, one of the wildfires that ravaged the state last summer, Caltrans said.

Another stretch of Highway 1 reopened in July 2018, after a massive mudslide in May 2017 heaped tons of rocks on a quarter mile section of the highway, making it impassable and adding 13 acres to the coastline.

California Gov. Gavin Newsom has declared a state of emergency for Monterey and San Luis Obispo counties in response to winter storms that "threatened to cause mud and debris flows," forcing the evacuation of thousands of residents, according to the declaration.

At least 25 structures in Northern California have been damaged as a result of mudslides and debris flow caused by a powerful atmospheric river-fueled storm. Most of the impacted areas are where burn scars exist from earlier wildfires.