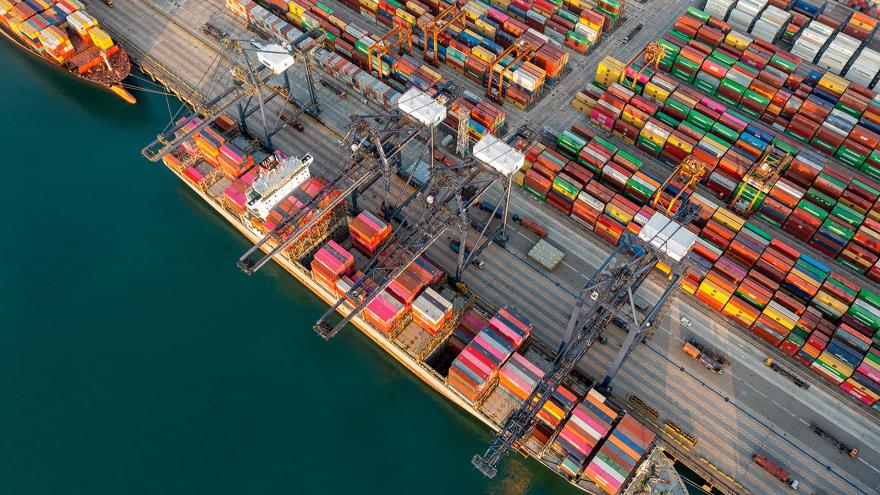 By Laura He, CNN Business

(CNN) -- A coronavirus outbreak in southern China has clogged ports critical to global trade, causing a shipping backlog that could take months to clear and lead to shortages during the year-end holiday shopping season.

The chaos began unfolding last month when authorities in the southern Chinese province of Guangdong — home to some of the world's busiest container ports — canceled flights, locked down communities and suspended trade along its coastline to bring a rapid spike in Covid-19 cases under control.

The rate of infections has since improved, and many operations have restarted.

But the damage has been done. Yantian, a port about 50 miles north of Hong Kong, handles goods that would fill 36,000 20-foot containers every day. It was shut down for nearly a week late last month after infections were found among dock workers. While the port has reopened, it is still operating below capacity, creating a huge backlog of containers waiting to leave and ships waiting to dock.

The congestion in Yantian has spilled over to other container ports in Guangdong, including Shekou, Chiwan, and Nansha. All of them are located either in Shenzhen or Guangzhou, the fourth and fifth largest comprehensive container ports in the world. The domino effect is creating a huge problem for the world's shipping industry.

The Yantian backlog "is adding extra disruption on an already stressed out global supply chain, including the significant seaborne leg of it," said Peter Sand, chief shipping analyst for Bimco,an association of shipowners. People "may not find all they were looking for on the shelves when shopping for Christmas presents later in the year," he added.

As of Thursday, more than 50 container vessels were waiting to dock in Guangdong's Outer Pearl River Delta, according to Refinitivdata. That's the biggest backlog since 2019.

The snag in operations in Yantian alone is concerning. The port has been unable to handle some 357,000 20-foot container loadssince late May, according to a recent estimate by Lars Jensen, CEO of Danish consultancy Vespucci Maritime. That's more than the total volume of freight impacted by the six-day closure of the Suez Canal in March.

Yantian port operations have recovered to about 70% of normal levels. But it isn't expecting to return to full capacity until the end of June.

The congestion in southern China has led major shipping companies to warn clients of delays, changes to vessel routes and destinations and spikes in fees.

Maersk — the world's largest container shipping line and vessel operator — told clients last week that ships could be delayed at Yantian for at least 16 days.

While the company said it would divert some carriers to alternative ports, that won't necessarily solve the problem. Maersk warned that the waiting time in places like other ports in Shenzhen, Guangzhou and Hong Kong could rise as even more ships flood in.

Shipping giants Hapag-Lloyd, MSC, and Cosco Shipping, meanwhile, have all hiked freight rates for cargo between Asia and North America or Europe. MSC, for example, said this month that it would increase shipping fees from Asia to North America by as much as $3,798 per45-foot container.

It's a global trend. Rates for eight major East-West routes have all surged from the same period a year ago, according to London-based Drewry Shipping. The biggest price jump was along the route from Shanghai to Rotterdam in the Netherlands, which soared 534% from a year ago to more than $11,000 for a 40-foot container.

Average container freight rates from China to Europe, meanwhile, recently hit $11,352.33, the highest level since at least 2017, according to Refinitiv.

The crisis in Guangdong is exacerbating the strain on an already stretchedglobalindustry.

In the United States, for example, major ports along the coast of California are already clogged with container ships, worsening the bottleneck at the country'sbiggest trade gateway with Asia.

The National Retail Federation called on US President Joe Biden earlier this week to address the logjam at US ports. In a letter to Biden, the organization warned that the issues "have not only added days and weeks to our supply chains but have led to inventory shortages, impacting our ability to serve our customers."

The shipping industry is also still witnessing ripple effects from the disruption in the Suez Canal in March, when the Ever Given got stuck and blocked one of the world's most vital trading routes for almost a week, said Parash Jain, HSBC's head of shipping, ports, and Asia transport research.

"If anything, unwinding of the backlog initiated following congestion in Yantian terminal could take months, as the onset of the peak season will mean demand will only further increase," he said.

"There is no room left anymore for error or unexpected events — it is all squeezed out," he said. "This means you can't afford a single mistake because there is no longer any buffer."

The pandemic wreaked havoc last year, as lockdowns temporarily closed factories and disrupted the normal flow of trade. As economies roar back to life, suppliers have been stretched by a pickup in manufacturing and extra demand from consumers.

But that increase in demand is colliding with almost unchanged capacity in container shipping. Reduced global airfreight capacity due to the collapse in long haul aviation has made matters worse.

"With sustained strong demand for ocean shipping around the globe, we will continue to see constrained ocean shipping with higher-than-normal rates and more than usual cargo rollovers," Joshi said, referring to shipments that have to be booked on a future voyage because they can't be loaded onto the original ship.

Demand is likely to shift somewhat as countries loosen Covid-19 restrictions and people start spending less on household appliances and other products and more on outdoor experiences again. But the constraints on the global supply chain are unlikely to go away soon.

"More recently we have seen extended fatigue in the global supply chain adding further to already existing challenges," Sand from Bimco said, adding that the strains will likely continue to be felt "for up to a year."