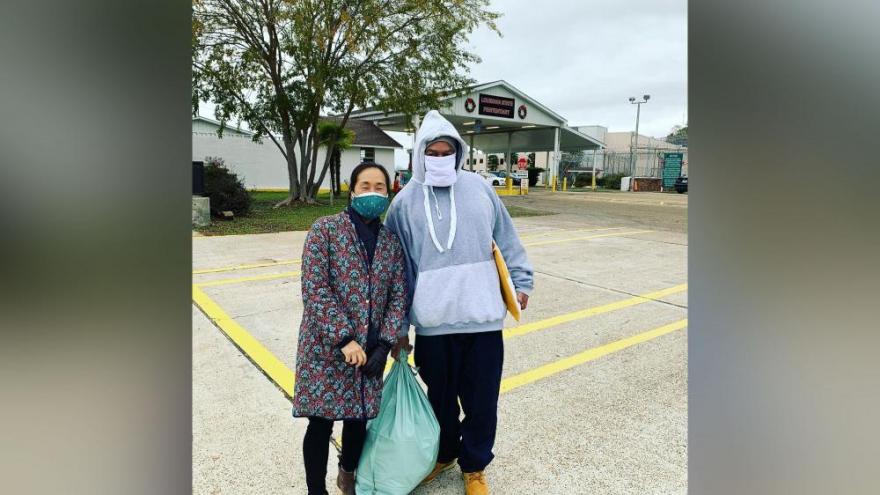 (CNN) -- In 2008, Fate Winslow was approached by a plain-clothed undercover police officer in Shreveport, Louisiana, looking for some marijuana.

Winslow, recently homeless at the time, borrowed a friend's bike and came back 10 minutes later with two small bags of marijuana worth $20, according to the Innocence Project New Orleans, who represented Winslow.

The officer arrested Winslow. And because Winslow had three priors -- a burglary of a business when he was 17 in 1985, a car burglary in 1995 and possession of cocaine when he was 36 -- the $20 sale landed Winslow a life sentence, according to IPNO.

On Wednesday, Winslow walked free after his case was resentenced for 12 years, with credit for time already served.

His case highlights the issues within the criminal justice system, IPNO said in a statement.

"There are hundreds of individuals serving life sentences for nonviolent crimes in Louisiana," said Jee Park, Winslow's attorney and the executive director of IPNO. "Instead of throwing the book at Mr. Winslow and sentencing him to life imprisonment just because we could, does not mean that was constitutional, legal and humane. He received an obscenely excessive sentence given his life circumstances and crime, and today, we are correcting that unconstitutional, inhumane sentence."

The District Attorney's office, according to the IPNO, agreed that Winslow did not receive effective counsel at his original sentencing. The office has agreed to the relief sought by Winslow in his Application for Postconviction Relief, the IPNO said.

CNN reached out to the Caddo Parish District Attorney's Office but has not received a response.

With 15 states and Washington DC having legalized recreational cannabis, the drug has become a multi-billion dollar industry in the US, although it remains illegal under federal law.

As states legalize marijuana's recreational use, more advocates have called for the expungement of marijuana-related criminal convictions. After legalizing cannabis in 2019, for example, Illinois offered relief to roughly 770,000 residents with marijauna-related offenses on their records, according to the Marijuana Policy Project.

New York made a similar move in 2019, though recreational marijuana is not legal in the state. More than 150,000 people had their marijuana convictions sealed in the state after Gov. Andrew Cuomo signed the bill into law in July.

"My dad and I got closer while he was imprisoned," Faith Winslow Canada, Winslow's daughter, said in a statement. "I cannot wait to have my dad back fully in my life. Twelve years is a long time. Too long. He deserves a second chance and I am so glad he is getting one."