A high school student is growing out his hair for his sick sister. When administrators asked him to cut it, he withdrew from school 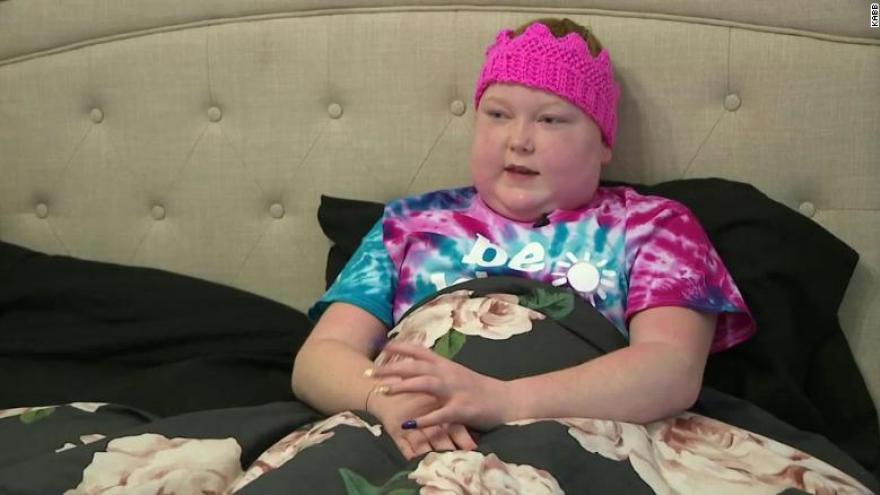 (CNN) -- When 16-year-old Newt Johnson found out his little sister was sick, he was ready to do anything for her.

That included growing out his hair until it was long enough to make a wig, in case she needed it. But because of his school's policies, that also meant withdrawing from his high school.

His sister and best friend, Maggie Johnson, was recently diagnosed with Wegener's disease. The rare auto immune disease affects her kidneys, leaving her with severe nausea and headaches that forced her to leave school in October.

The fiery 11-year-old known for her beautiful, long red locks was starting to lose her hair after she began chemotherapy and dialysis treatments.

"Some spots of my hair has came out, just like started falling out," Maggie told CNN affiliates WOAI/KABB.

But her brother's sweet gesture meant he had to make one serious decision: either cut his hair or withdraw from his Texas school.

According to the Poth Independent School District (ISD) handbook, which was obtained by CNN, male students are not permitted to have hair extending "beyond the ear opening on the sides nor beyond the top of a dress shirt collar in the back."

"It really stressed me out because I already worried about my sister," Johnson said. "It made me feel good that I could do something for her."

Instead of cutting his hair and following the rules. Johnson decided to withdraw from Poth High School and home school while continuing to grow his mane. It needs to reach eight to 14 inches before he can donate his hair to his sister through the nonprofit Locks of Love.

District officials confirmed that Johnson is no longer a student at the high school.

"Listen to your kids, if they really believe in something, even if it does go against the rules, sometimes you just have to dig deep [to] see if it's really worth it or not," said Johnson's father, Alan Johnson. "It's worth it."

Johnson was asked by his high school to cut his hair before the beginning of winter break in December. The school gave him until Tuesday, January 21, before the code of conduct consequences would be implemented, according to Poth ISD Superintendent Paula Renken.

But when he returned to school, he hadn't gotten a haircut.

Johnson's mother, Jamie Mathis-Johnson, was called into the school to pick up Johnson to get a haircut that Tuesday, Renken said. After meeting with the principal, the school also offered Johnson's parents a meeting to formally discuss their feelings with the school district's officials.

"The parent declined the offer from the Poth High School principal, Mr. [Todd] Deaver to set up a meeting with the superintendent to discuss her dissatisfaction with the dress code," Renken told CNN.

The district holds an annual review of the student handbook before the school year starts, giving the public an opportunity to provide recommended changes to district guidelines, including student dress code.

If Johnson had returned to school, he would have been assigned in school suspension or after school detention, according to Renken. Johnson, she said, "would not have been denied his education."

"I don't understand why he has to get in trouble for doing this for me," Maggie said.

Despite the unfortunate circumstances, PISD raised over $3,000 for the Johnson family to help with hospital expenses, along with collecting hundreds of cards from fellow students and staff.

"It was never about not supporting a sick child," Renken said.

"Principal Deaver performed his duties as he is expected to under the policies and procedures in place. He and his staff, along with the other two campuses in Poth ISD, enforce the board directed rules and guidelines fairly and consistently."