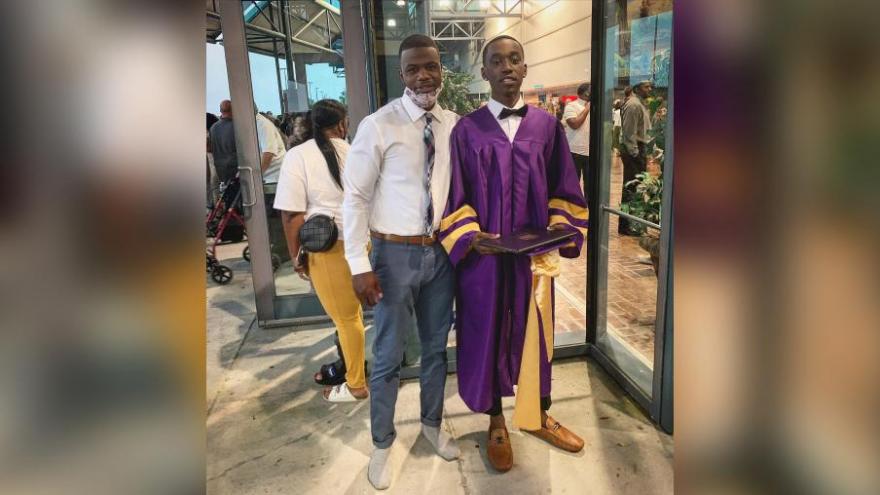 (CNN) -- With minutes to spare, a Hahnville High School teacher in Boutte, Louisiana, traded shoes with a senior so he could walk at his graduation after allegedly violating the dress code.

Daverius Peters told CNN he showed up to his high school graduation in a pair of black leather Alexander McQueen shoes, ready to walk across the stage to get his diploma when he was stopped, at the door. The faculty member informed him that his footwear violated the dress code, and he would not be permitted into his own graduation.

According to Peters, the students were required to wear dark-colored dress shoes and not allowed to wear slippers, athletic shoes, or opened-toed shoes. He thought his shoes matched the requirements.

A teacher to the rescue

He began pacing, and immediately spotted another teacher, John Butler, who had mentored him on several occasions through his high school career. Butler's daughter was also graduating, and he was waiting on his wife when Peters franticly approached him.

"I told Mr. John, 'Mr. John, she said I can't graduate and walk across the stage because of my shoes,'" Peters said.

Butler was confused by the situation, telling CNN he then escorted Peters back to the door in hopes of clearing up the misunderstanding. Unfortunately, the faculty member still would not allow Peters to enter the ceremony.

"At that moment I didn't have time to get upset or go back and forth with her -- it was a no-brainer," Butler said.

Butler took off his shoes, two sizes too big for Peters, which the senior graciously accepted. The teacher let him in with only a few minutes to spare before they were to begin the ceremony, and Butler attended the ceremony barefoot.

"You don't stop a kid from receiving his high school diploma, already the most important moment of their life to that point, you don't take that away for something as small as shoes -- and that's exactly what was going to happen," Butler said.

Getting the shoes brought back the joy of the day

Peters said he was embarrassed, but getting Bulter's shoes brought back the joy of the day.

"It felt good walking across the stage and hearing everybody saying my name," Peters said.

As he shuffled across the stage, curling his toes to keep the large shoes from falling off, Peters's mom, Jima Smith, told CNN she didn't even know that it was her son.

"I see him sliding across the stage and wondered, 'Whose shoes does he have on?'" Smith said.

"I have been in complete disbelief of everything that went on, and I had no idea my child went through all these things fighting to get his diploma," she said.

"This should not happen to any child, parent, or teacher, period -- it put us all in a bad situation."

The school acknowledges the situation, and Stevie Crovetto, director of public information at St. Charles Parish Public Schools, said in a statement to CNN that they are looking to revise the graduation dress code.

"We appreciate this being brought to our attention so we can continue our work towards more inclusive and equitable practices. We applaud Mr. Butler for his kind gesture and selfless act," the statement said.

"I'm just so grateful it was Mr. John Butler who was there to save the day for my child," Smith said. "I'm so grateful for him."