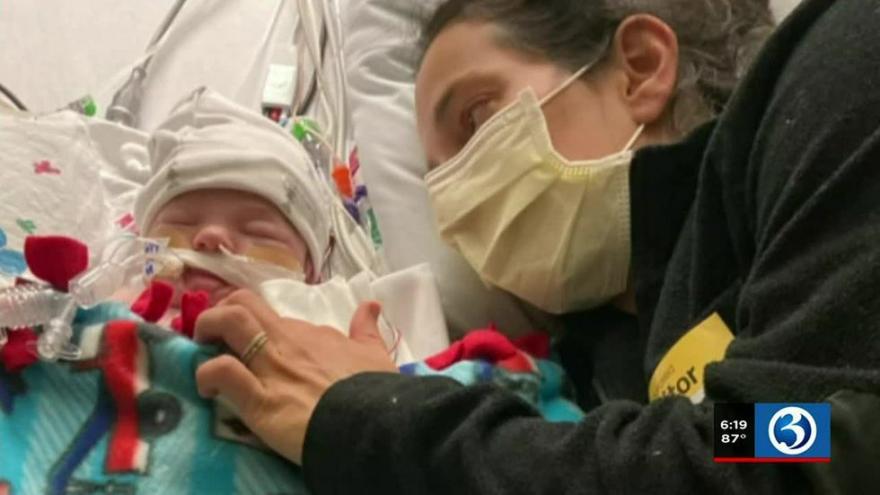 HAMDEN, Connecticut (WFSB) -- The family is speaking out in hopes of warning others about parechovirus.

When baby Ronan was born, he was a happy and healthy baby, but when he was about a week old his parents noticed something was wrong.

“We went from the highest high to the lowest low in a span of a month,” said Kat Delancy, Ronan’s mother.

In May, Kat and Mitch Delancy welcomed their second child, Ronan.

“He was a born May 21st a healthy full-term baby,” said Kat.

About a week after he was born, Kat noticed something wasn’t right.

“He was fussier, he wasn’t eating quite as well, and he had redness on his chest,” said Kat.

She took him to his pediatrician on a Friday and doctors said he was fine.

That night Kat says she felt something was wrong, so she brought him to Yale New Haven.

“As soon as I walked into the hospital, he stopped breathing,” said Kat.

Shortly after, Ronan started having seizures.

“Once they started seeing the seizures, they had to put him under sedation,” said Kat

Doctors couldn’t figure out what was going on with Ronan. It wasn’t until his 4th day in the hospital that Kat and Mitch got some answers.

“It was explained to us at the hospital that it’s extremely rare to find, but it might not be that rare because they don’t ever really look for it,” said Mitch, Ronan’s father.

Yale New Haven Health recently sent out a newsletter alerting other physicians about the virus, saying it “may be underdiagnosed due to lack of awareness.”

“I’m hearing through emails and other social media alerts that there is, particularly right now since the beginning of May, there are an increasing number of cases,” said Dr. Michelo.

He says most children will just suffer a fever but, in some cases, it could cause severe brain damage.

Unfortunately, Ronan had a severe case.

“I’ll never forget the doctor kneeling down and saying to me as I was in shock saying you have a very sick baby,” said Kat.

Ronan’s brain was severely damaged, and he couldn’t be saved.

“Going from the best days of our lives to having our child die in our arms,” said Kat.

Now, Kat and Mitch are hoping to warn other parents and push pediatricians to test for this disease more frequently.

“My big reason for wanting to talk about it is I want Ronan to have a legacy. I would love that. I want his name I want to keep that alive. I don’t want another family to go through this,” said Kat.

Doctors say preventing parechovirus is like any other virus, make sure to keep your hands clean and stay away from anyone who’s not feeling well.

Yale New Haven released a newsletter with more information on parechovirus that you can read here:

Parechovirus can cause neurologic disease in young infants, which can be severe, and may be underdiagnosed due to lack of awareness. This newsletter serves as a reminder of the clinical presentations in young infants and test availability since 2013 at Yale New Haven Hospital. In older children and adults, infection are usually mild or without symptoms.

In 1956, what we now call parechoviruses were first isolated from the stools of two children with diarrhea, and were designated as enteroviruses (EV), specifically echoviruses types 22 and 23 (1). However, when molecular methods were developed for pan-enterovirus diagnosis in the 1990s, these two echoviruses were not detected and thus were placed in a separate Parechovirus (PeV) genus, and a separate PCR was required for detection (2,3). Human infections are associated only with PeV species A and 18 PeV-A types have been identified.

Subclinical infections and clinical syndromes: Parechoviruses primarily cause inapparent infections in young children, and clinical syndromes similar to EV (4,5). PeV-A1 is the most commonly identified type and is primarily associated with asymptomatic or mild respiratory and gastrointestinal infections, and less frequently with CNS disease. The majority of PeV-A1 infections occur in children less than 1 year old, and almost all children are infected by age 5. Severe disease is rare.

In contrast, PeV-A3 is the most common PeV recovered from CSF and appears to have a biannual cycle. PeV-A3 has been shown to be specifically associated with sepsis and fever in young infants, especially those less than 3 months of age and with neonatal encephalitis with white matter injury (6-9). Indeed PeV-A3 has been reported as the leading cause of CNS infection in children, more common than any single EV type (10). A striking feature is that neonates with PeV-A3 encephalitis often have normal CSF findings (11). PeV-A3 was also identified as a cause of neonatal hepatitis-coagulopathy syndrome. It has been postulated that severe PeV-A3 neonatal infections may be due to lower seroprevalence of PeV-A3 antibody in women of child-bearing age and the lack of protective transplacental antibody, as well as different cellular tropism (12).

Parechovirus testing: Since July 2013, the Virology Laboratory has offered PeV PCR, including a combined PeV and EV PCR diagnostic panel intended for hospitalized children less than 5 years of age with enterovirus-like illness, in particular for neonatal sepsis and meningoencephalitis.

Test offered: The CDC Parechovirus real-time RT-PCR assay (13) is performed once a day, 5-6 days a week, and is available as both a single test and a combined EV/PeV panel. It is also now included in the febrile infant pathway.