A gym trainer exposed 50 athletes to Covid-19, but no one else got sick because of a ventilation redesign 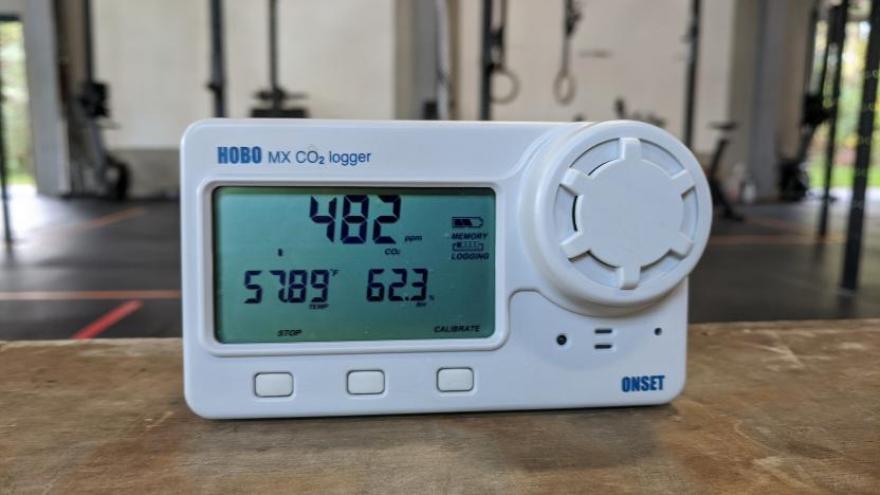 (CNN) -- A Virginia gym owner thought she had a nightmare scenario on her hands when she learned that 50 athletes were potentially exposed to Covid-19 particles by one of the gym's coaches. But not a single member ended up contracting the virus, thanks to the extra safety precautions and ventilation measures she put in place.

Velvet Minnick, 44, is the owner and head coach at 460 Fitness in Blacksburg, Virginia. Like many gym owners across the nation, she was forced to shut down the facility in March due to coronavirus. They rented out equipment and held Zoom classes, but it wasn't long before members were burned out.

As the state entered Phase 2 of reopening in June, Minnick was allowed to have athletes back inside her facility. She knew one member, however, who could help her get people back while keeping them safe.

Linsey Marr, 46, is a professor of civil and environmental engineering at Virginia Tech and joined 460 Fitness about two years ago. She has an expertise in airborne transmission of viruses, air quality and nanotechnology.

When gyms closed in March, there was a lot of talk in the CrossFit community about the mental health benefits of working out and some owners were lobbying for their gyms to stay open. While that didn't work, it did get them included in the early phases of reopening. And it kick-started this gym's reopening plan and safety procedures.

Minnick consulted Marr on ventilation as well as strict hygiene and distancing protocols to keep athletes as safe as possible while they were working out.

"I knew the virus was transmitted mainly through the air so I thought it was really important to have good ventilation so everyone wasn't able to breathe it," Marr told CNN.

Minnick created athlete stations near the bay doors that gave each one 10 feet of space. The stations are marked on the floor with orange tape and have all of the necessary equipment located inside. There's no traveling about the gym or doing partner workouts while sharing equipment.

"Ten feet of space has always been my mantra," Marr said, which is more than the recommended six feet because people in the gym would be working out and breathing heavily.

Because Minnick built the facility, she had the engineering and HVAC documents to share with Marr.

"I did the calculations on how big the space was, what the typical wind speeds were in the area and if the doors were open what would the resulting ventilation be?" Marr said.

She found that the space provided far more fresh air than required by the professional organization, American Society of Heating, Refrigerating and Air-Conditioning Engineers, which gives recommendations for ventilation. Looking at other research and studies, Marr talked with experts on what ventilation rate is necessary to really cut down the risk of transmission indoors.

"We don't see outbreaks above a certain threshold," Marr said. "And the gym with the open doors was way above that."

Marr said they are now actually able to close the doors a bit more than they initially thought and still meet that ventilation standard using a carbon dioxide monitor to track indoor levels.

"Carbon dioxide is exhaled breath and is a good indicator of how much viruses might be building up in the air," Marr said.

Depending on the weather and the comfort level of the athletes in the gym, they may open the doors more or less. And athletes always have the option of taking their equipment outside.

In September, when Minnick learned that one of her coaches wasn't feeling well, she wasn't initially worried. While he thought it was just allergies, he soon lost his sense of smell and taste, Minnick said, so he got tested for coronavirus. She asked him to quarantine until he received his results.

When it came back positive, they first determined that he contracted the virus outside of the gym at another environment where he was indoors. Then, she ran a test in the system to see who he had coached prior to getting sick.

Minnick personally contacted all 50 athletes and checked in with them for a two-week period. A few people decided to get tested, but not one member developed symptoms.

"I contacted all of my members on a Monday," Minnick said. "And then the ... health department contact tracers. They did not even notify me of the direct exposure until Wednesday. With something like this, it's so important to know right away."

Even after a potential exposure and with dropping temperatures as winter approaches, the gym remains diligent with its procedures and athletes continue to adjust.

There are no sweaty post-workout hugs and no high fives. Often the class has a conversation about if the doors are staying open or closed. If they want them closed to stay warm, every member must wear a mask.

"Members are willing to go that extra mile, to be cold, to be wet, to endure, just so that they can be safe," Minnick said. "They'll do whatever it takes to have the benefits of exercise."