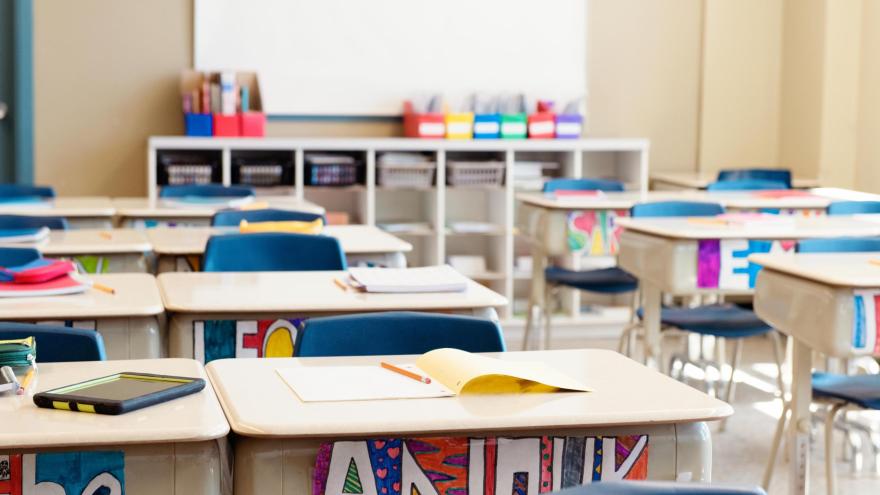 (CNN) -- A workgroup developing a second-grade social studies curriculum for the Texas State Board of Education last month suggested using the term "involuntary relocation" to describe people who were sold into slavery, the board's chair said, amid national debates on the role of critical race theory in classrooms.

The proposed phrase was part of the initial draft outlining the second-grade standards from a review committee that included a section titled "Enslaved Peoples in America."

"The board -- with unanimous consent -- directed the work group to revisit that specific language," Keven Ellis, chair of the Texas State Board of Education, said in a statement.

In the meantime, the board will continue working on the curriculum later in the summer, according to Aicha Davis, a member of the State Board of Education who represents parts of Dallas and Tarrant counties.

"I have a hard time seeing how it is acceptable to substitute the phrase 'slave trade' for the phrase 'involuntary relocation,'" Davis told CNN.

"We were given a 24-page document with recommendations from a workgroup that looked at kindergarten through second grade," Davis continued. "And within the second-grade standards, that is where I found that they were proposing we talk about their journey using the phrase 'involuntary relocation.'"

The suggested language comes as the concept of teaching critical race theory in US classrooms has become a contentious debate involving parents, school boards and lawmakers across the country.

The notion seeks to understand and address inequality and racism in America. The term has also become politicized and been attacked by its critics as a Marxist ideology that's a threat to the American way of life.

According to Davis, there was some discussion from Texas Education Agency about "why they chose that language."

"They wanted to make sure to introduce slavery at a younger grade level, but they wanted to be sure that they were being intentionally careful with age-appropriateness," Davis said.

Davis added that while she understands the age element in this case, it's crucial that students are being taught the truth about American history.

"We need to think of appropriate ways to discuss it that doesn't diminish what happened during the slave trade," she noted.

"How do we continue to put more of these types of stories into our social studies classes, and how we make sure our younger students do have access to this, and it is age-appropriate, but at the same time, it is building a foundation of truthful knowledge that our students really really really deserve to know."

Curriculum will not hide slavery, board chair says

Davis believes that Senate Bill 3 enacted last year likely impacted educators' discussion over the curriculum. The law -- which Davis described as "the anti-critical race theory bill" -- reshaped how social studies teachers can discuss race and current events in their classrooms.

"(The bill) specifically says that you cannot make a student feel uncomfortable, and so they were given a copy of this law as they were doing the review and a lot of the products that we received. It looks like it's a reflection from some of the things that were in that law," Davis explained.

Ellis, the board chair, reaffirmed to CNN that students will be taught the true history of slavery.

"There was not and is not a proposal from the State Board of Education that would in any way aim to hide the truth from Texas second graders about slavery."

He reiterated that the term "involuntary relocation" does not "paint a clear or full picture" of African people who were enslaved.

"As a result, the (board) voted unanimously to send the language back to be reworked. This board is committed to the truth, which includes accurate descriptions of historical events.

"Our state's curriculum will not downplay the role of slavery in American history," he added.

The topic of slavery is not currently addressed in the second-grade curriculum, Ellis noted.

"This work is meant to address that deficiency. And it's important to reiterate that the (board) has final say over the draft language produced by any of the working groups," he said.