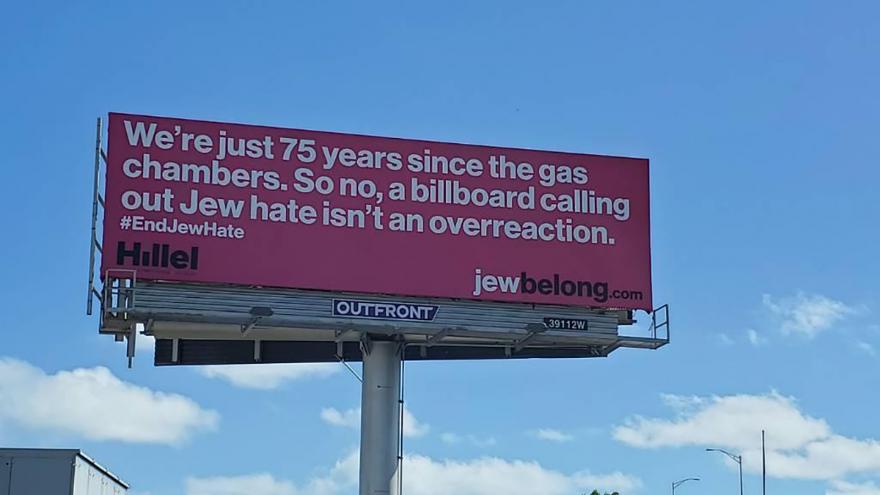 (CNN) -- A non-profit organization has put up four billboards throughout South Florida in an effort to raise awareness about anti-Semitism and make people think about its effects.

JewBelong, an online resource created to welcome and inspire Jewish people, put up the billboards on Friday throughout Miami-Dade and Broward counties as part of their #EndJewHate campaign.

The campaign comes at a time of heightened concern over a rise in anti-Semitism across the country. It also comes weeks after a man held four people hostage at a Texas synagogue in an hourslong standoff and a series of anti-Semitic vandalism in Chicago. The Anti-Defamation League told CNN earlier this week that anti-Semitic incidents are at a historical high.

"We need to talk about it and we need to be uncomfortable for a minute," Archie Gottesman, co-founder of JewBelong, told CNN. She believes awareness campaigns will lead to "important conversations."

Last weekend, Nazi demonstrations took place in Orlando, and the week prior, hundreds of flyers with anti-Semitic language were distributed in various South Florida neighborhoods. From 2019 to 2020, Florida also saw a 40% rise in harassment and vandalism, with 91 incidents reported in 2019 and 127 reported the following year, according to a report from the ADL.

Gottesman said there is a lot of work to be done to stop acts of hate against Jewish people. "There's a lot of ways to stem bad things from happening -- there's education, podcasts, articles and books -- and they're all important," Gottesman told CNN. "To fight hate, we need a lot of tools in our tool belt and our awareness campaign is one really important tool."

One bright pink and white billboard read, "We're just 75 years since the gas chambers. So no, a billboard calling out Jew hate isn't an overreaction." Another, "Does your church need armed guards? Cause our synagogue does."

The billboards have previously appeared in New York City, Boston, San Francisco and Las Vegas. Toronto will be one of the future locations for the campaign. JewBelong looks for locations offering the most visibility, according to Gottesman.

Gottesman said the organization's goal is to go nationwide and to extend the length of the campaigns. JewBelong also hopes to put three more billboards up in Florida in the next couple of months.

"It's really important to not just drop the subject because I don't think it's getting any better and until it starts getting better, we have to keep fighting," Gottesman said. "Sometimes you have to be a little bit compelling and a little different, to get people's attention."