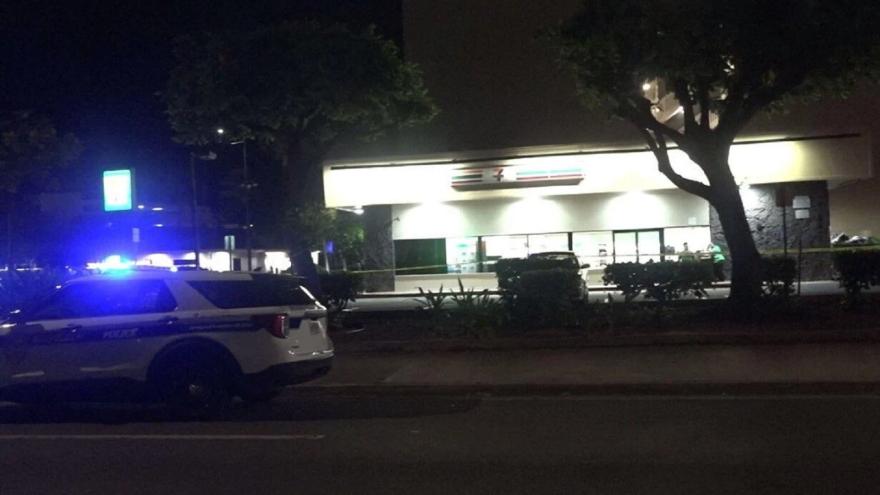 HONOLULU, Hawaii (KITV) -- It's a shocking crime involving what witnesses describe as a sword.

"All of a sudden the guy took like a sword, something that you cut meat," said Swiss visitor Michael Suissa, who was picking up ice cream just after midnight at the 7-Eleven Hawaii store on Ena Road.

That's when he says what started as a small argument quickly got out of control.

"Then the guy just took in his left hand the sword and cut his hand," he said. "I saw a guy that was in shock. Like he said 'what happened to me? Why he did it to me?' Then all of a sudden he falls on the floor and I think he lost his conscious(ness)."

Just two days ago, he said the same 7-Eleven employee helped him in the store.

"Very kind, very nice, very polite and this guy that I saw yesterday and the guy I saw two days ago are not the same guy," Suissa added. "To do what he did to this guy -- he changed his life....He lost his hand just for a simple argument."

Honolulu police arrested a 46-year-old man for attempted murder. The victim has only been identified as a man in his 40s. He was found at the entrance to the parking lot with multiple wounds.

7-Eleven would not comment but said it is cooperating with HPD's investigation.

"I know this 7-Eleven's had incidents before in the past with people breaking windows and stuff like that," said Barry Ehlers, who lives on Ena Road. "The fact that it may have been an employee or it may have been someone outside, I don't know, but that's a little scary. I do think it goes back to mental health --that's definitely a crisis in our country."