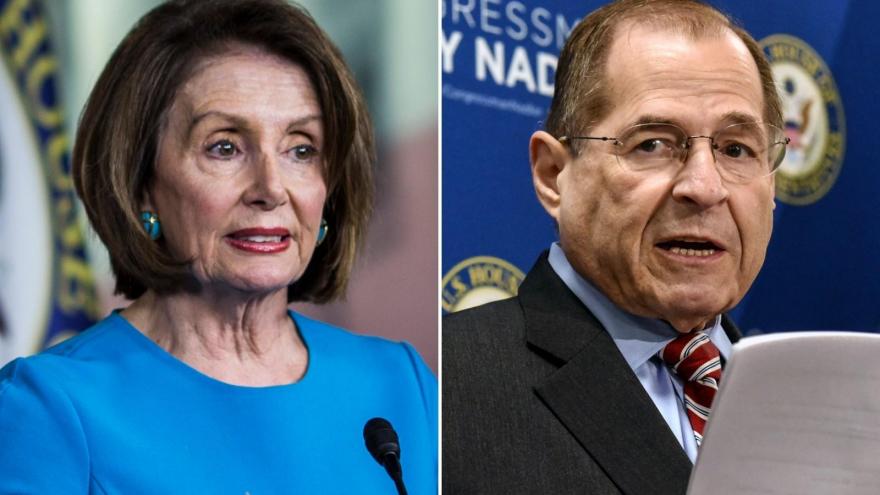 The stunningly consequential accusation spelled out in the Democrats' impeachment report represents the most sweeping effort yet to capture the span of President Donald Trump's alleged offense and to boil it into a crisp indictment.

(CNN) -- The stunningly consequential accusation spelled out in the Democrats' impeachment report represents the most sweeping effort yet to capture the span of President Donald Trump's alleged offense and to boil it into a crisp indictment.

In effect, the 300-page House Intelligence Committee summary of witness testimony, timelines and phone records accused Trump of perpetrating one of the most serious political crimes in the history of the United States.

The report is a roadmap toward formal articles of impeachment -- an argument to a nation split in two on Trump's political fate that there is no alternative but to remove him from office 11 months before the next general election over his pressure on Ukraine for political favors.

The stark charge that the House Judiciary Committee will take up in its first impeachment hearing Wednesday fits the gravity of Congress' most somber duty -- deciding whether to end a presidency.

It is that the 45th President presents an immediate, clear and future threat to American national security, the Constitution and the resilience of the republic's democratic self-governance itself.

For all the all-consuming clamor of two-month-old impeachment intrigue and the vicious political crossfire, Wednesday's hearing represents a dark moment in America's story.

An attempt to oust a sitting President has only got this far three previous times, and impeachment typically opens political sores that infect the nation's political life for decades.

Yet as momentous as the current situation is, it's hardly a surprise. From its first hours, Trump's presidency has torn at the conventions of his office, rejected constraints that his predecessors accepted and barged into the boundaries of the law. Impeachment has often seemed like a logical consequence.

The seriousness of the charge belies the shallow partisan battles that erupted over Trump's alleged Ukraine scheme. It is far more detailed than the 123-page prebuttal sent out Monday by the GOP House minority — that did not dismantle the facts laid out by Democrats but argued that Trump's magisterial conduct was perfectly within bounds.

And it is a more coherent exercise than Trump claimed Tuesday in a tirade in London, in which he blasted Schiff as a "deranged human being."

The House Judiciary Committee will assume responsibility for driving the Democratic investigation toward its apparently inevitable halfway house -- a vote to make Trump the third impeached President in the full chamber by Christmas.

The committee will hear from four constitutional law professors -- three requested by Democrats and one by Republicans -- in the first test of House Judiciary Chairman Jerry Nadler's ability to manage a process as disciplined and punchy as the one presided over by Schiff in televised hearings.

The task of the committee will be to draft Schiff's product into binding articles of impeachment, the formal charges that the President's behavior satisfies the standard of "Bribery, Treason and high crimes and misdemeanors" required for impeachment.

An audacious and grave accusation

Specifically, Schiff's report alleges that Trump and a wider than previously established band of senior officials and associates tried to coerce Ukraine into investigating potential domestic rival Joe Biden -- in effect soliciting a foreign power to interfere in a US election. Furthermore, the report says that Trump conditioned a White House visit and nearly $400 million in US military aid on the investigation and a probe into a conspiracy theory that Ukrainians meddled in the 2016 election.

And when Trump was found out, he initiated a categorical effort to cover up his scheme -- which the report finds was masterminded from the very top.

Then -- making a broader, 30,000-foot case -- the Democratic report seeks to put Trump's behavior in a philosophical context and matches it against the expectations of the presidency itself.

The audacity and gravity of the charge against Trump, in historical and constitutional terms, is stunning.

"No other President has flouted the Constitution and power of Congress to conduct oversight to this extent," the report said. "No President has claimed for himself the right to deny the House's authority to conduct an impeachment proceeding, control the scope of a power exclusively vested in the House, and forbid any and all cooperation from the Executive Branch."

The report continued, "Even President Richard Nixon — who obstructed Congress by refusing to turn over key evidence — accepted the authority of Congress to conduct an impeachment inquiry and permitted his aides and advisors to produce documents and testify to Congressional committees."

Warning that if Trump is not stopped now, he could commit fresh crimes against the state -- or pave the way for a mendacious future president -- the report lays out a clear theory of impeachment even if it stops short of a recommendation.

The case is especially stark when it relates to what the Intelligence Committee says is Trump's unprecedented obstruction of Congress' responsibility to conduct oversight.

"The damage to our system of checks and balances, and to the balance of power within our three branches of government, will be long-lasting and potentially irrevocable if the President's ability to stonewall Congress goes unchecked," the report said.

"Any future President will feel empowered to resist an investigation into their own wrongdoing, malfeasance, or corruption, and the result will be a nation at far greater risk of all three."

The House Judiciary hearings are a chance for Democrats to frame a sharp case that connects with the American people and irrevocably damages Trump politically -- even in the likely event the Republican-led Senate acquits him in an impeachment trial.

Given Trump's almost mystical hold over Republican lawmakers and the vehement support he enjoys from his base, even a case as comprehensive as this is unlikely to overcome a nation that is irrevocably polarized over its President.

In its prebuttal to the Democratic report, the House GOP effectively argued that nothing that the President, his aides or his personal lawyer Rudy Giuliani did in Ukraine usurped his authority.

The President argues the whole thing is a "hoax" and dismisses criticism of his July 25 call in which he leaned on Ukrainian President Volodymyr Zelensky, saying his conduct was perfect.

But Republicans, while accusing the Democrats of depriving Trump of his rights and rigging the investigation against him, have not made a comprehensive dismissal of the facts at hand.

They have joined Trump's campaign of misinformation and misdirection, aimed at devaluing fact and creating ambiguity and leaving voters unfamiliar with the details confused.

It's a strategy, conducted in alliances with Trump's populist conservative media mouthpieces, that the President pioneered during then-special counsel Robert Mueller's investigation and succeeded in dampening the political impact of his findings.

Some Republicans are taking a more limited approach to their anti-impeachment arguments.

"No President should be above the law -- he shouldn't be below the law either," Sensenbrenner said.

Democrats argue in their report, however, that the call was the "dramatic crescendo" of a month's-long conspiracy against Ukraine perpetrated by the President's team.