A good Samaritan jumped into water and saved a toddler who fell out of a car, authorities say 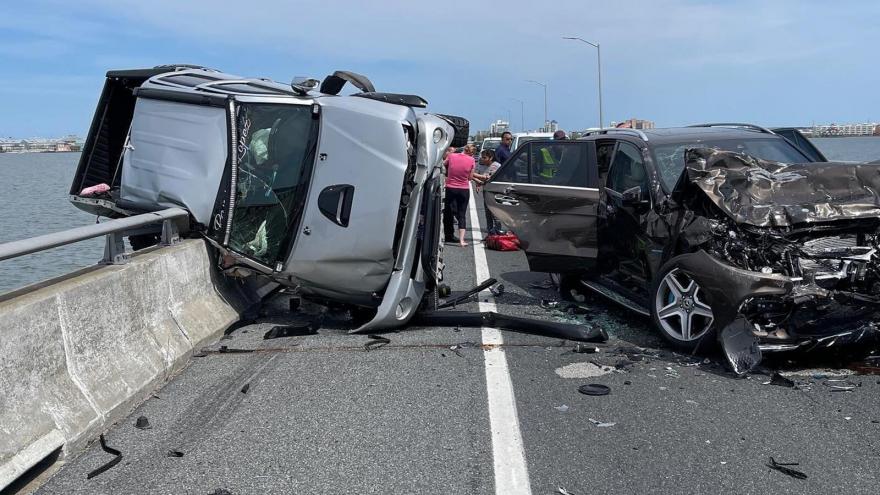 At least eight people were taken to hospitals May 2 after a crash that left a car dangling off the guardrail of a bridge in Ocean City, Maryland, authorities say. Authorities say a good Samaritan jumped into the water and rescued an infant.

(CNN) -- The 23-month-old girl who fell out of a car and into a bay Sunday after a multi-vehicle crash on a bridge in Ocean City, Maryland, is expected to make a full recovery thanks to a "humble hero" who jumped into the water to save the child, authorities said Monday.

Eight people were taken to hospitals Sunday after the crash on the Route 90 bridge left a car dangling off the guardrail, authorities said. All eight were discharged from hospitals and are doing well, Ryan Whittington, firefighter and medic at Ocean City Fire Department, told CNN on Monday.

Whittington said the man who saved the toddler is choosing to remain unnamed publicly. The fire department is calling him the "humble hero" for his rescue.

The man was driving on the bridge, and his car was also involved in the crash, Whittington said. The drivers were pointing down to the Assawoman Bay, where he saw the girl lying in the water, face down.

"He just jumped into action," said Whittington, adding that the water in that area is about 5 feet deep, and the jump was more than 25 feet.

"He saved a 23-month-old child. There's no doubt in our mind that if he had not did what he did when he did it that we would be having a different headline to this story," Whittington said.

The girl and the man were rescued by boaters in the bay, Whittington told CNN.

Fire and police units were dispatched to the bridge around 2:45 p.m. Sunday, the Ocean City Fire Department said in a news release. Authorities found one vehicle half over the guardrail and multiple people injured, the department said.

Rob Korb, a life member of the Ocean City Fire Department and a senior deputy fire marshal in Worcester County, told CNN he "stumbled" on the incident while he was out and running errands.

"The real hero in this situation is the good Samaritan that jumped in to provide life saving measures for the infant. I'd like to shake his hand or buy him a beer or both someday," Korb said.

Firefighters were able to secure the vehicle with rescue tools and paramedics treated several patients, the fire department said in the release.

Seven people were taken by ground to local hospitals while the child was flown to Johns Hopkins Children's Hospital, the department said

Authorities are now investigating the cause of the crash, the fire department said.

"For as much tragedy that you see there, the outcome has really been a successful one," Whittington said. "It was a very fortunate day for a lot of people who experienced traumatic injury."