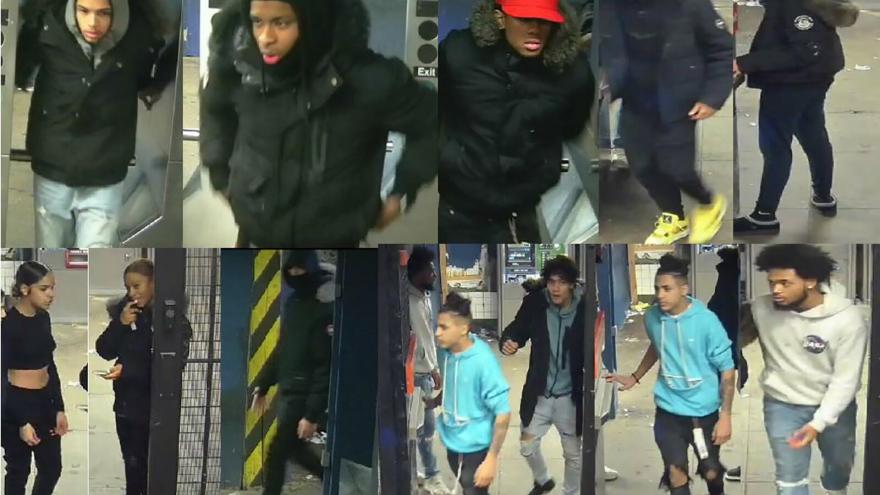 Police released photos of people wanted in connection with the attack.

(CNN) -- A good Samaritan died on New Year's Day while trying to help a man who fell onto subway tracks during a gang assault in New York City.

At around 2:40 a.m., the assault victim -- a 38-year-old male -- was approached by several individuals on the southbound B/D train platform in the Fordham Road subway station in the Bronx, the New York City Police Department said in a statement.

The gang "displayed a knife and began assaulting him" and at some point the assault victim landed on the subway tracks, according to police. It is unclear if he fell or was pushed.

A 36-year-old witness went down to the tracks to help the victim, but was "subsequently struck by the oncoming train, causing his death," police said.

The train didn't strike the assault victim, according to police, but he was treated and released by a local hospital for a fractured arm.

Police said the suspected gang left the station in unknown directions, and have released surveillance photos from the scene in an effort to identify anyone who may have witnessed the incident, or any of the alleged assailants.

The subway station, located on 188th Street, falls under the 46th Precinct, which has seen 34 felonious assaults in the past 28 days, according to city data.

CNN has reached out to the Metropolitan Transit Authority, which is responsible for public transportation across the city, for comment.