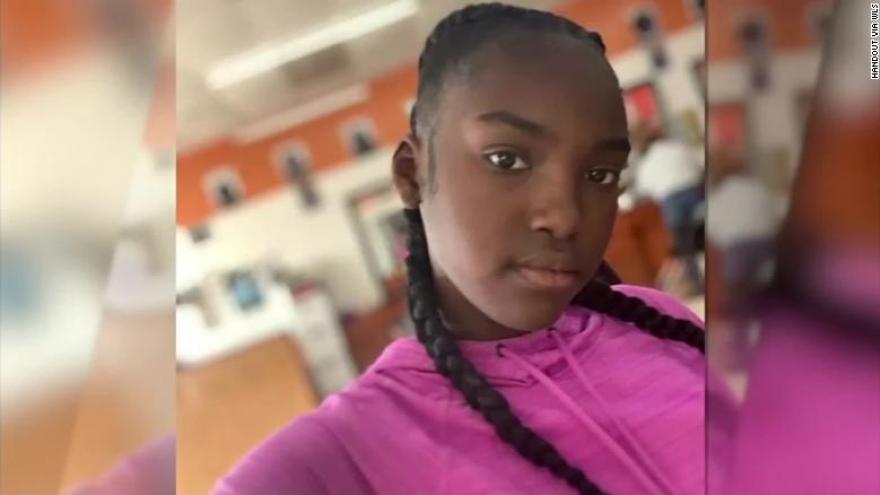 (CNN) -- A girl was on a computer planning her 12th birthday party this week when she was shot in the head by a stray bullet, according to officials in Harvey, Illinois.

Kentayvia Blackful died the next day -- on her birthday -- her mother told CNN affiliate WGN.

"This is a baby we're talking about. She hadn't even really experienced life yet," her grandfather, Kenneth Donner, told WGN on Wednesday. "The position she was in, life was fun."

Kentayvia, an honor student who was president of her sixth-grade class, was at her home Monday around 9 p.m., when she was fatally shot, according to WGN and officials in Harvey, a suburb south of Chicago.

Her family had been watching the Chicago Bears game while Kentayvia worked on the computer, choosing T-shirt designs for her birthday party, relatives told WGN.

"My daughter called me in a panic and said my baby had been shot," Donner told CNN on Friday.

She was taken in critical condition to Advocate Christ Medical Center. She died around 10:30 p.m., Tuesday, the Cook County Medical Examiner's Office said.

"Everybody was sad," Donner said. "And while everybody was hopeful, it just didn't look good from the start."

Police apparently had no one in custody in the case as of Friday.

"As a police department, we are committed to giving our full attention to this crime against our young resident," Harvey Police Chief Eddie Winters said in a news release Tuesday before the girl died. "We are asking for the support of our residents."

"As a grandfather ... you've got to say, 'Stop doing this, stop doing that.' I never had that with her," he told CNN. At school, Kentayvia would help other kids with their homework and was a mentor to some of the other students.

The girl's family and supporters on Wednesday night released balloons that might otherwise have been used for her birthday, WGN reported.

The family will still hold the birthday party that Kentayvia was meant to have, at a skating rink. It will be a fundraiser to help the family cover funeral costs, Donner said, but it will also honor her memory.