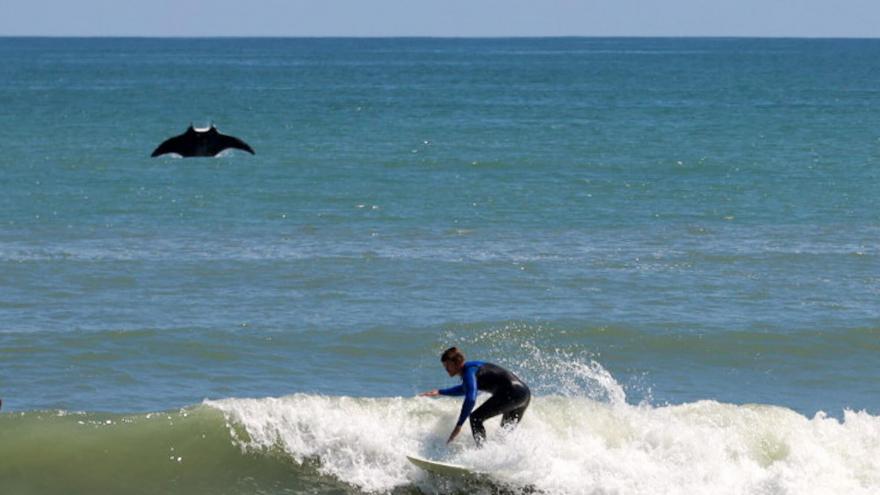 Rusty Escandell says he noticed a little splash while taking pictures of surfers in Satellite Beach, Florida, but he didn't know that a huge manta ray had jumped out of the water until he looked at the photos at home.

(CNN) -- A lucky photographer captured an amazing shot of a giant manta ray that leaped out of the water as he was taking pictures of surfers from a Florida beach.

Rusty Escandell told CNN that he took the photograph on Sunday, while spending the day with family and friends at a beach near Officers Club Beach at Patrick Space Force Base, but he didn't realize it until he got home.

Escandell had taken a burst of photos that showed the ray breaching out of the water.

"It was pretty amazing," he said.

His daughter and her boyfriend are both marine biologists and said they'd seen some manta rays in the water after he took the photo, Escandell said.

Escandell owns an auto repair shop and lives in nearby Satellite Beach, and said he enjoys taking pictures at the beach fairly regularly.

He didn't know the surfer in the photo, but they've talked since the photo went viral.

Giant manta rays are the world's largest rays and can grow to a wingspan of up to 29 feet.

The slow-swimming, migratory fish are listed as threatened under the US Endangered Species Act and as endangered on the IUCN Red List.

"Their populations are declining worldwide," said Jessica Pate, a senior scientist at the Marine Megafauna Foundation.

Pate told CNN that about 50 people have sent her Escandell's photo over the last few days.

She's just started studying why adult manta rays aggregate off of central and north Florida in the spring.

On Sunday, she spotted 64 adult giant manta rays while conducting an aerial survey of the area between Sebastian and Daytona Beach -- which includes Satellite Beach.

She said it's also not known why giant manta rays breach, or jump out of the water, it could be a mating ritual, they could be trying to dislodge parasites, or it could be a way of communicating because it makes a loud sound.