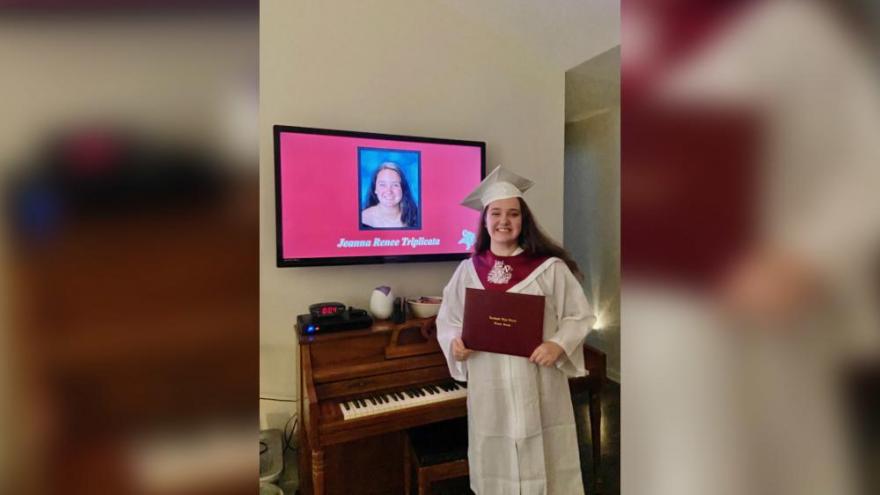 Jeanna Triplicata was set to walk the stage at her high school graduation in late July.

(CNN) -- Jeanna Triplicata wasn't a thrill-seeker, but she decided to try something daring after graduating high school: going skydiving for the first time.

The 18-year-old and an experienced instructor died when something went wrong on the tandem jump in Thomaston, Georgia, on Sunday.

As her siblings and parents watched from the ground, they saw a parachute spinning and a pair of people somersaulting in the sky. They later learned it was Jeanna.

"We were all so looking forward to after she landed and to talk to her and hear her story," her father, Joey Triplicata, told CNN. "I feel like we were robbed of that and now we're robbed of the rest of her life. It's so painful."

The teenager from Newnan and instructor Nick Esposito, 35, of Warner Robins, died at the scene, Upson County Sheriff Dan Kilgore said in a statement provided to CNN. The sheriff's office is investigating the accident.

"Upon exiting the aircraft, the primary parachute failed to open properly and went into a spin," Kilgore said in the statement. The emergency parachute deployed at a very low altitude but it never fully opened, he added.

The sheriff said Esposito was an experienced skydiver and an employee of Skydive Atlanta, based at the Thomaston-Upson County Airport, about 60 miles south of Atlanta.

Jeanna will never get to walk across the stage at her high school graduation, which was rescheduled for the end of July because of the pandemic. She won't get to attend the University of North Georgia. She won't become an English teacher, like her father said she aspired to do.

Triplicata said it tears at his heart that he won't get to see the person his eldest child would have become.

Triplicata, 43, described Jeanna as an atypical teenager. He said his daughter was "special" and she never gave her mother and father trouble.

"She was very family-oriented, and she wanted to do the right things in life," he said. "She wasn't a rule breaker. When we bought her first car, she didn't want anything flashy or that would stand out."

The teen had just graduated from Northgate High School, where she was on the color guard team. She was the captain her senior year and she enjoyed performing alongside her brother, 15-year-old Giovanni, who was in the band.

Jeanna was obsessed with singer-songwriter Harry Styles. She had seen one of his concerts and was set to attend another one next year, which was postponed because of the coronavirus. She was wearing a Harry Styles shirt the day she went skydiving, her father said.

Her other passions included Disney's "The Little Mermaid," even though it wasn't the coolest thing for an "elder teen" to like, her dad said. She was also a big "Grey's Anatomy" fan, always trying to get her parents to watch it, which they never did.

"Right now, I can't even imagine enjoying a TV show," her father said. "When we do, we're certainly going to watch it and think of her."

Sands and Jeanna went skydiving together on Sunday. It was another adventure for the two of them to do and something that Jeanna had wanted to do for years.

This was only Jeanna's second time on a plane -- the last time was when she was an infant, her father said.

"She wanted to just see how things look up in the air that high," he said. "She had never experienced that. It was a lot of first times for her and it was supposed to be a great, great day and it turned out to be the worst day of our lives."

Sands was the first tandem jumper off the plane that day. The 60-year-old is more of a thrill-seeker than her granddaughter and she eagerly went to find Jeanna to swap stories of their experiences, Triplicata said.

The entire family waited for Jeanna, to hear how it went. Her parents, brother, 9-year-old sister, Julia, and her sister's friend waited, and it seemed to be taking too long.

Someone said she must have landed in the field by the airport, which happens sometimes, her father said. Some members of the family started getting panicky because they didn't know anything.

"We get in the van and we just race across the airfield. We had to cross over the runway, and we didn't really care," Triplicata said. "We had heard somebody say that they saw cop lights."

That's when he said they knew something was up.

At that point, her father thought, "You know, this is safe. This doesn't happen," thinking it was nothing major. Maybe she hurt her ankle during the landing, he thought.

As the family approached the field, a couple of sheriff's deputies were there. "He tells us that it doesn't look good and that's when we lost it," her father said.

It had been hours at this point, but when the sheriff's deputy took all of the adults to a room, Triplicata knew his life was to change forever.

He shielded his wife, Bridgette, and said he would tell the children what happened. They had been there for the waiting, the uncertainty and for what came next.

"Usually you try to shield things from your kids, especially younger kids from something like this," Triplicata said. "I just felt so terrible. You're not supposed to see something like that at 9 years old."

Jeanna and the instructor, Esposito, died after the parachute malfunction. Eyewitnesses saw the main parachute deploy, according to Skydive Atlanta.

"Our community is devastated for both our team member and the student and their respective families," Skydive Atlanta owner Trey Holladay said in a statement. "We are all stunned and truly at a loss for words as we are a close-knit family. We have spoken with the next of kin and all are asking for privacy while we process and grieve."

Skydive Atlanta said it is working with authorities and the FAA to investigate what happened.

The skydiving outlet has hosted "tens of thousands" of jumps since it opened in 1985, the statement said.

He said he is hoping for answers as authorities investigate.

"I want this never to happen again, so that's why I want to know what happened," Triplicata said. "So, a parent, husband, a wife, a daughter will never have to go through this again. This pain is nearly unbearable."

The only thing that has helped the family survive is the outpouring of love and support from people who loved Jeanna and even some strangers, he said.

"In the state we are in the world right now and in the country with all of the division, it's lovely to see all of this love and support," he said. "Jeanna would have loved that. She would have wanted us to be comforted and loved as possible."

The Triplicata family plans to bury their daughter Saturday after a public service in their hometown of Newnan.

The family created a GoFundMe campaign to help raise money for the funeral.

"I hate that this tragedy is the reason why people are going to learn more about her and her life," her father said. "The tragedy has happened and at this point, we just want Jeanna to be remembered as the person she was, which was a wonderful young lady."