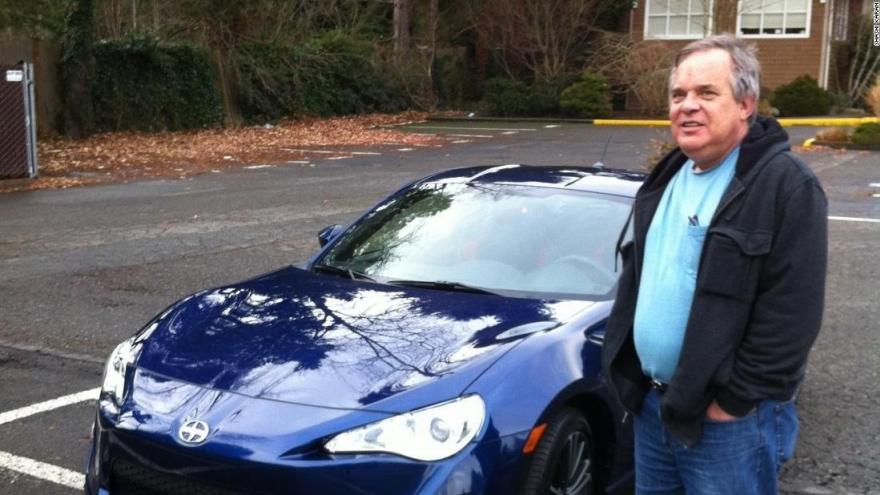 Alan Naiman poses next to one of his few splurges -- a Scion sports car. The thrifty social worker left more than $11 million to charities when he died in January.

(CNN) -- Alan Naiman was known for his frugality -- he wore Costco jeans, bought his favorite pocket T-shirts at a grocery store and squirreled away every penny he could. So when he died, friends were surprised to learn that he had left more than $11 million to charities in the Seattle area.

The 63-year-old never married and never had children, but kids were very important to him. He fostered a few children and cared for his brother, Daniel, who had developmental disabilities.

Naiman became a social worker after leaving a career in banking.

"He was a highly valued employee who was dependable and dedicated to his work," Washington State Department of Children, Youth and Families spokeswoman Debra Johnson told CNN.

He worked three jobs to get established in the new field, his friend Shashi Karan told CNN.

Karan and Naiman worked together at the bank in the '80s and kept in touch over the decades until his death on Jan. 8, 2018.

"He was just that kind of guy that he couldn't just spend the money. It was just in his nature to save the money and put it aside," Karan said.

Karan said he was one of the few people who knew just how much money Naiman had.

"I think he always knew that he was going to leave his money to charity," Karan said.

The friends had talked about investments and savings over the years, and when the time came for Naiman to make a will he asked Karan to be his executor.

He said Naiman received a sizable inheritance when his father died, which added to his fortune.

The scrimping, saving and deal hunting was more like a hobby to Naiman than a sacrifice.

"Saving money was sort of a game to him," Karan said. "He would brag about how he had a whole day out and didn't have to spend a single cent."

Naiman loved cars, and when his brother died in 2013 he made a rare splurge on himself and bought a Scion FR-S sports car.

"It's a nice little sports car, but it's not a Mustang or a Corvette or a Porsche that he easily could have afforded," Karan said.

Naiman considered doing more traveling or buying a house with a nice view, but his cancer interrupted those plans.

Karan said that after his diagnosis, Naiman spent a lot of time researching charities.

One group that's benefited from his kindness is the Pediatric Interim Care Center, which cares for medically fragile babies suffering from prenatal drug exposure.

The group posted a tribute to Naiman on its website and said he donated enough money to pay off the mortgage on its building. He told the group in a letter that the center had been there for him when he needed to find a place for sick babies that were brought to him.

"We are so grateful to Alan, not only for his legacy, but also for the life he devoted to children," the group wrote.

The group Childhaven said it would use its gift to provide essential services to youth in foster care and vulnerable children, and provide equine-assisted therapy, life-changing wishes for children with critical illnesses and medical care to thousands of children.

Naiman was excited to think about how much good his money would do when the time came, Karan said.

"'My gift is going to be bigger than their annual budget. It's going to blow them away,'" Karan recalled him saying. "And it did."