A four-year timeline of Donald Trump and the Supreme Court 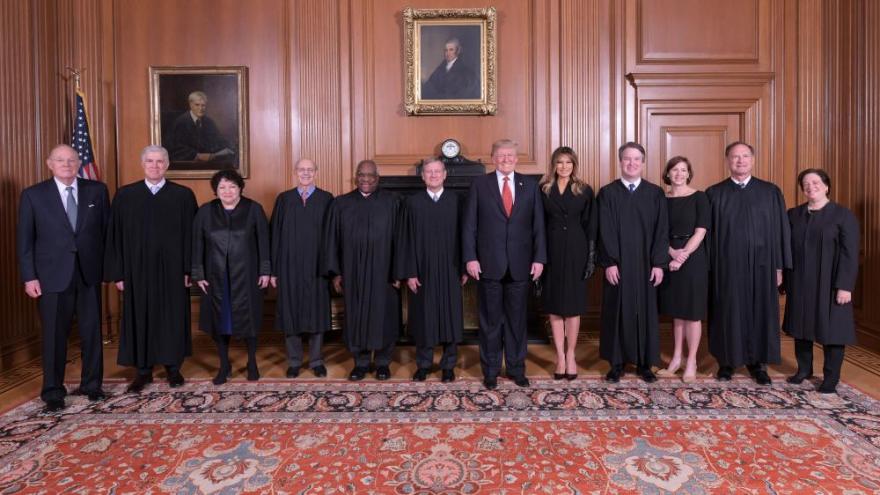 (CNN) -- Here's a timeline of key events involving Trump and the Supreme Court over the past four years:

Jan. 20: Chief Justice John Roberts administers the oath of office to President Donald Trump, who swears to "preserve, protect and defend the Constitution of the United States."

Jan. 27: Trump signs an executive order for a new travel ban, a key provision of which bars foreigners from seven countries, most of them majority-Muslim.

Jan. 31: Trump nominates Neil Gorsuch, a judge on a Denver-based US appeals court, for the Supreme Court vacancy that has been open since Justice Antonin Scalia died in February 2016.

Feb. 3: US District Court James Robart temporarily blocks the Muslim travel ban. The next day, Trump calls Robart a "so-called judge" and says, "if something happens blame him and the court system." (Litigation over the travel ban continues, and the administration twice amends the order before the case reaches the Supreme Court.)

March 16: Appeals court Judge Jay Bybee, an appointee of President George W. Bush, implicitly calls out Trump's tirade against Robart and other judges: "The personal attacks on the distinguished district judge (Robart) and our colleagues were out of all bounds of civic and persuasive discourse -- particularly when they came from the parties. ... Such personal attacks treat the court as though it were merely a political forum in which bargaining, compromise, and even intimidation are accepted principles."

April 7: The Senate confirms Gorsuch by a 54-45 vote after Senate Republicans abolished the 60-vote threshold that had been needed to cut off a Democratic filibuster.

April-June: Supreme Court sides with the Trump administration's position in a series of 5-4 decisions favoring employers over workers, including to stop states from requiring "fair share" union fees from non-members to pay for collective bargaining on pay and benefits; by the same 5-4 vote, the justices uphold an Ohio voter purge law.

June 26: The most prominent case of the session, Trump v. Hawaii, also breaks along those 5-4 lines, as the five-justice conservative majority upholds the third iteration of the Trump travel ban. Roberts says Trump's order "is an act that is well within executive authority and could have been taken by any other President." He brushes aside dissenting justices' reminders of Trump's anti-Muslim rhetoric and says the court must consider "the authority of the Presidency itself."

Oct. 6: The Senate confirms Kavanaugh in a 50-48 vote following weeks of partisan divisions, including over claims by a California psychology professor, Christine Blasey Ford, that he sexually assaulted her when they were both teenagers.

Oct. 8: Trump holds a ceremonial investiture for Kavanaugh in the White House's East Room, at which he apologizes to Kavanaugh on behalf of the nation, saying, "You, sir, under historic scrutiny, were proven innocent." That misstates the situation. Kavanaugh denied all allegations but no trial or hearing on the charges was held and the claims were neither conclusively validated nor rejected.

Nov. 21: After Trump disparages a judge who ruled against the administration in an asylum dispute as an "Obama judge," Chief Justice Roberts issues a rare and striking response that begins, "We do not have Obama judges or Trump judges, Bush judges or Clinton judges."

January: Justice Ruth Bader Ginsburg misses a two-week sitting of oral arguments after she is treated for lung cancer; two cancerous nodules were removed from her lung in late December.

Jan. 22: The Supreme Court lets the Trump administration ban most transgender people from serving in the military by a 5-4 vote along conservative-liberal lines. Trump had announced the ban via Twitter in July 2017.

Feb. 19: Ginsburg returns to the bench to participate in the most important cases of the annual session, over partisan gerrymandering and the 2020 census questionnaire.

June 27: Chief Justice Roberts sides with the court's four liberals to effectively end the Trump administration's attempt to add a citizenship question to the census. At the same time, Roberts casts the fifth vote with conservatives and writes the opinion declaring that federal judges may not resolve challenges to partisan gerrymanders.

July 26: The Supreme Court lets the Trump administration redirect $2.5 billion in Pentagon funds to begin building a wall at the southern border, by a 5-4 vote controlled by the conservative majority.

Dec. 13: The Supreme Court agrees to take up long-running disputes over subpoenas for Trump tax records and other financial documents on the same day that a Democratic-led US House committee votes articles of impeachment against Trump. The full House impeaches Trump later in December.

Dec. 31: As part of his year-end report, Chief Justice Roberts writes, "We should celebrate our strong and independent judiciary, a key source of national unity and stability. But we should also remember that justice is not inevitable."

Jan. 21 to Feb. 5: Chief Justice Roberts presides over the US Senate trial of Trump. The Republican-led Senate easily acquits Trump on charges of abuse of power and obstruction of Congress.

February: A Supreme Court dispute over a new rule for green-card applications prompts Trump's ire, although the administration prevailed. After the five-just conservative bloc let the Trump administration enforce a new "public charge" rule immigrants who might need food stamps or other public benefits, Justice Sonia Sotomayor dissents, pointing up the majority's pattern of siding with the administration. Trump lashes out on Twitter against Sotomayor and Ginsburg.

June 18: Chief Justice Roberts breaks with his conservative brethren and joins the four liberals to reject Trump's effort to roll back the Obama-era DACA program for undocumented immigrants who came to the US as minors. Trump tweets: "Do you get the impression that the Supreme Court doesn't like me?"

July 9: By a pair of 7-2 votes, the Supreme Court rejects Trump's arguments to keep his finances secret in the face of subpoenas from US House committees and the Manhattan district attorney. But the compromise court decisions give Trump additional ways to fight the subpoenas. Trump leaves office having relinquished none of the disputed financial documents.

Sept. 18: Justice Ginsburg dies, after months of struggles with cancer and other health problems.

Sept. 26: Trump nominates Amy Coney Barrett on September 26 in a Rose Garden ceremony that turns out to be a coronavirus "super-spreader" event.

Oct. 26: The Senate confirms Barrett on a 52-48 vote, along strictly partisan lines.

Oct. 26: The five-justice conservative majority declines to extend a deadline for mail-in ballots in Wisconsin. The decision reinforces a pattern of rejecting changes in absentee ballot deadlines and other election practices because of Covid-19.

Dec. 11: The nine justices unanimously reject a case brought by Texas and other Republican states challenging the Nov. 3 election results that showed Joe Biden beating Trump. The Texas attorney general had sued Pennsylvania and three other battleground states that Biden won. Trump backed the litigation with his own filing to the justices and called the case "the big one."