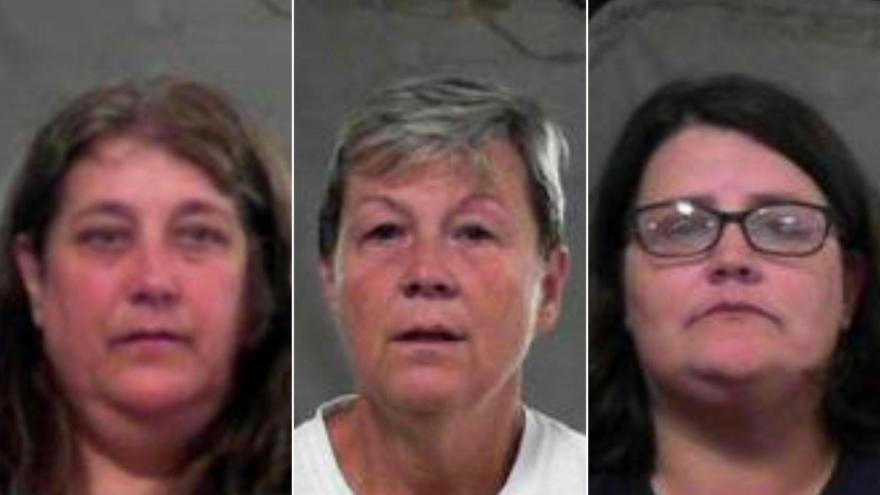 Kristin Douty, June Yurish and Christina Lester have been charged with failure to report abuse or neglect at a West Virginia school.

(CNN) -- Suspecting her 6-year-old daughter with autism was being abused at school, a West Virginia mother hid a recording device in her daughter's hair, court documents say. On Friday, the girl's former teacher and two former aides were arrested, the state's attorney general said.

Christina Lester, the former teacher, and June Yurish and Kristin Douty, former aides, were charged with misdemeanor failure to report abuse or neglect, according to a press release from West Virginia Attorney General Patrick Morrisey.

Amber Pack was concerned when her daughter Adri came home with bruises from Berkeley Heights Elementary in October. The marks appeared to be pressure bruises from tight grips, said Ben Salango, an attorney for the Pack family.

Adri was nonverbal, but she would cry getting on the bus and didn't want to leave the house. It was clear she didn't want to go to school, the attorney said.

Pack bought a recording device and put it in Adri's hair bun.

"She was absolutely shocked by what she heard," Salango told CNN.

The teacher and aides at the Martinsburg school threatened Adri and other children, telling them they would hit them in the face and knock their teeth out, and they threatened to withhold food, Salango said.

"These arrests send a strong message — that child abuse will not be tolerated and must be reported," Attorney General Patrick Morrisey said in a statement. "We must continue working to ensure vulnerable children are protected, especially at school."

The attorney general filed a civil lawsuit in February that accused Lester, Yurish and Douty of verbally abusing the students by threatening physical violence. The comments on the recording "include threats of violence, verbal abuse and other outrages," according to the complaint.

The investigation led Morrisey to make criminal referrals to the prosecutor, the statement said.

The civil complaint was amended in May to include the principal, Amber Boeckmann, and the county's deputy superintendent, Margaret F. Kursey, alleging they "actively tried to obscure evidence with a flawed investigation," according to the attorney general's office.

The Berkeley County Board of Education was also added as a defendant in the amended civil complaint as "it bears responsibility because those committing the allegations did so during the course of their employment with the board."

CNN has reached out to the former teacher, aides, principal, deputy superintendent and the school district for comment. Attorney Christian Riddell, who represents former aides Yurish and Douty, told CNN affiliate WJLA that they have "no comment at this time."

Salango said the Pack family is "very happy" that charges have been filed against the teacher and the two aides.

"We're pleased that the prosecutor took her time, did a thorough investigation and decided to arrest the three individuals this morning," the attorney said. "We've had faith in the system from the beginning and look forward to a disposition of criminal proceedings."

"She's in a new school and is in a loving environment and doing much better," Salango said.