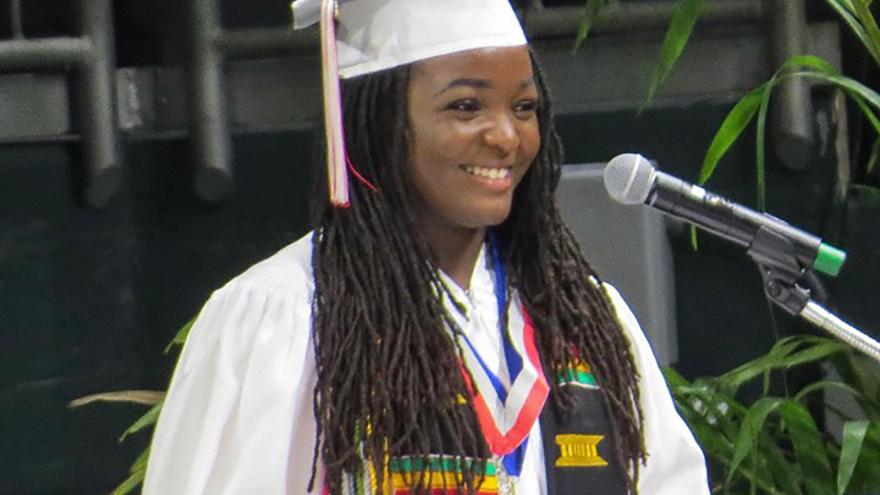 (CNN) -- Florida teen Ashley Adirika has always dreamed of attending an Ivy League school. So in late fall, she applied to not just one -- but all eight of them.

On Ivy Day, the fateful spring day when the prestigious schools all announce their first-year admission decisions, Ashley opened eight tabs on her computer -- one for each's applicants portal. One acceptance letter popped up. Then another. And another.

Until she had them all: Brown, Columbia, Cornell, Dartmouth, Harvard, Penn, Princeton and Yale.

It was a surreal moment for the 17-year-old, whose mother emigrated to the US from Nigeria three decades ago. Ashley was surrounded that day by family members -- including her four siblings -- who joined her in squealing in delight at each new acceptance letter.

"I just decided to shoot my shot at all of them and see if it would land. And I had no idea that I would get accepted into all of them," she says. "On Ivy Day, I remember crying a lot and just being extremely surprised."

Ashley, who graduated from Miami Beach Senior High School this month, joins an exclusive group: Since 2018, each Ivy League school has accepted less than 12% of its applicants. This year Yale accepted 4.5%, Columbia took 3.7% and Harvard accepted just 3.2%, the lowest number in the university's history.

Ashley also got accepted to seven other top-rated schools, including Stanford, Vanderbilt and Emory. She picked Harvard, where she plans to major in government this fall.

She's been a force on the debate team

Ashley says she was conflicted between Harvard and Yale, but it all came down to her career aspirations. Her goal is to learn how government works and how policies can help fix economic disparities in communities.

"Before the college application process, Yale was actually my top choice. But when I did further research for what I want to do specifically, which is explorations in policy and social policy and things of that nature, Harvard just had a better program," she says.

At her high school Ashley was on the debate team and served as a student council president.

The teenager has always been curious about how the world works, says Bess Rodriguez, debate coach at nearby Carol City Middle School, who recruited Ashley for the team when she was in the eighth grade.

She was such an immediate force on the team, the other students were scared of debating her, Rodriguez says.

"She was very smart and articulate. Some of the debate topics were so sophisticated, like should the US sell arms to Saudi Arabia. She dug into the material, she was always so well prepared," says Rodriguez, who also teaches English at the middle school.

"The other students would say, 'Oh no, we have to debate Ashley.' College debaters and local attorneys would come up to me and say, 'Wow, we can't believe she's in eighth grade. She should be an attorney.'"

Ashley continued with debate in high school, and plans to join the debate team at Harvard. And yes, she hopes to go to law school after she completes her undergraduate studies.

But what she'll do with her law degree remains up in the air, she says.

"I am really passionate about policy and using policy to empower communities. And so in the short term, for me, that looks like becoming a lawyer," she says. "But in the long term, I want to use that as a platform to do work in policy."

She started an organization to help young women

There's one thing Ashley's pretty sure about: She plans to continue making an impact beyond her campus.

As a high schooler, she started Our Story Our Worth, an organization that provides mentorship, confidence-building and sisterhood to girls and young women of color. Being part of the debate team, she says, taught her how to articulate herself when talking to members of the organization.

"When I was in elementary school, I had the privilege of being a part of a mentorship program for girls. I was mentored by women in college and they taught me important skills, instilled confidence into me and gave me the outlet I needed to express myself. I will never forget the sense of solace that their support gave me," she wrote on the organization's website.

"Unfortunately, as I ... continued into middle and high school, that sense of solace began to fade. There was a lack of programs available for girls, much less those of color."

Our Story Our Worth currently works with girls and young women in the Miami community, but Ashley hopes to expand it nationwide.

She credits her work ethic to the women in her life, including her mother, a single mom to five children.

"She has just instilled in me the value of education and working hard, as well as all of the strong women in my life, like my older sisters," she says. "For me, it's about making the most of the opportunities that I have at my fingertips and really just making sure that the sacrifices that have been made for me weren't done in vain."

At her high school graduation, Ashley gave a speech before the students received their diplomas. Wearing a sash with the words "Black Girl Magic," she highlighted the importance of preparation, punctuality and finding light even in dark times.

When she's not thinking of new ways to empower girls in her community, Ashley says she loves to play flag football and write in her journal. She also taps into her creative side by painting and writing music, she says.

As she prepares to report to her new home in Cambridge, Massachusetts, in August, she's stashed all the acceptance letters and miniature flags she received from different schools in a keepsake box.

That way, she says, she'll always remember that big dreams do come true.

And the sweatshirts and hats she got from all the Ivy League universities she's not attending? She doled them out to her nieces and nephews. That way, she says, they'll have a visual reminder that they can do it, too.