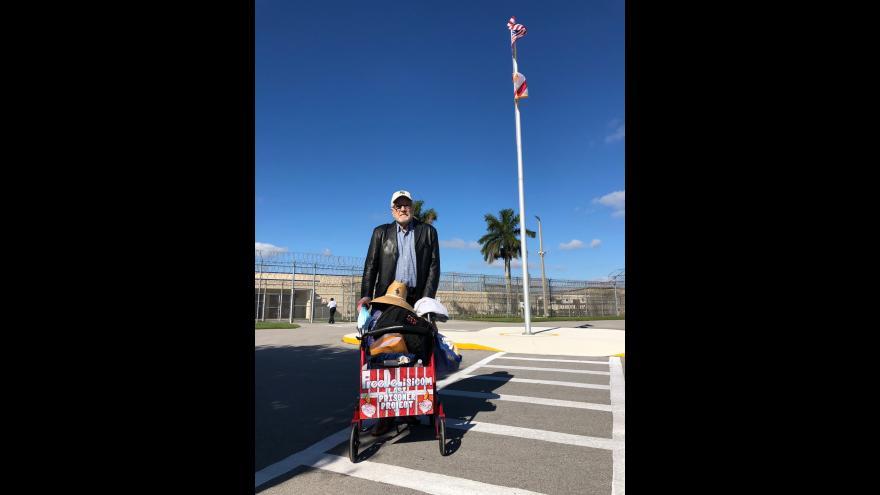 Richard DeLisi had been incarcerated since 1989, when he was convicted on charges of racketeering, trafficking in cannabis and conspiracy.

(CNN) -- After spending 31 years in prison for a nonviolent marijuana crime, the man thought to be the longest-serving inmate convicted on cannabis charges in the US has been released.

Richard DeLisi, 71, was released Tuesday from the South Bay Correctional Facility in Palm Beach County, the Florida Department of Corrections confirmed to CNN.

He'd been incarcerated since 1989, when he was convicted on charges of racketeering, trafficking in cannabis and conspiracy, and sentenced to 90 years in prison for smuggling more than 100 pounds of marijuana from Colombia into Florida.

His release marks the first time in 32 years he hasn't been behind bars, according to the Last Prisoner Project, a nonprofit that advocates for releasing prisoners convicted on marijuana charges.

The Last Prisoner Project partnered with attorneys to push for the early release of DeLisi, whom they say is the country's longest-serving nonviolent cannabis prisoner. The group said the pandemic made his release even more urgent, citing his health and chronic health issues like asthma, diabetes and chronic obstructive pulmonary disease as factors that heighten his risk for severe illness or death from Covid-19. Attorneys with the group also stressed the nonviolent nature of his crime. Moreover, since his conviction, laws governing marijuana use in many states have changed dramatically, in some cases decriminalizing it for recreational use.

Despite pressure from the Last Prisoner Project, Florida Department of Corrections press secretary Kayla McLaughlin told CNN that the decision to move up DeLisi's release date was not "related to any action by an outside party."

DeLisi's release date was initially moved up from summer 2022 to May 2021 after an error was discovered on his record, McLaughlin said, which restored 390 days of provisional release credits he was owed upon the start of his sentence in 1989.

Good behavior also earned him "gain time," or a reduction in his sentence. DeLisi had previously forfeited 120 days of "gain time" due to disciplinary infractions. But because DeLisi's last disciplinary report was from July 2005 and because he was 120 days from his new release date of May 2021, he was eligible to have his "gain time" restored, which moved up his release date, McLaughlin said.

DeLisi's family met him when he was released Tuesday, said Mary Bailey, managing director of the Last Prisoner Project, who attended DeLisi's release. He met two of his five grandchildren for the first time and enjoyed a seafood meal with his family after getting tested for Covid-19. Bailey said.

DeLisi's release was preceded by the House of Representatives' vote to decriminalize marijuana nationally, a move legislators said was meant to "address the devastating injustices caused by the War on Drugs." It's not expected to pass the Republican-controlled Senate, however.

Correction: An earlier version of this story misspelled the name of the country Colombia.