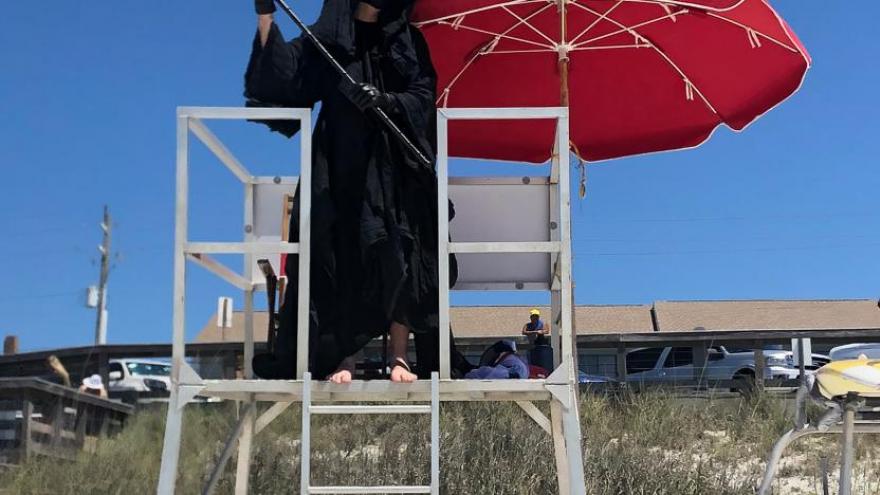 Daniel Uhlfelder, a Florida lawyer, is haunting Florida beaches dressed as the Grim Reaper to protest their reopening, which he believes is premature.

(CNN) -- A Florida lawyer who visits the state's reopened beaches dressed as death itself is calling on Gov. Ron DeSantis to require the public to wear masks.

Daniel Uhlfelder, who sued the state's Republican governor earlier this year saying he prematurely opened beaches, has spent the last several weeks warning beachgoers of the coronavirus's rising danger while dressed as the Grim Reaper -- complete with a dark cloak and a giant scythe.

"Unfortunately, when I started this work in March, I had a bad belief that this was going to get really bad. Unfortunately, my predictions have exceeded what I thought," Uhlfelder -- this time dressed in a light blue shirt and pink tie -- told CNN on Monday.

Criticizing DeSantis for leaving decisions like masks and beach access up to local officials, Uhlfelder said, "he needs to issue a mask order because masks work."

"Local officials have instituted mask mandates in their respective counties, including Miami Dade, Broward, Palm Beach, Orange, Hillsborough and Duval. These are Florida's largest counties, therefore most of the state's population is under a mask mandate," Cody McCloud, press secretary to Gov. DeSantis told CNN. "Some counties have experienced significant cases of COVID-19 and others relatively few, which is why the input from municipal leaders is important to determine the best course of action for a particular community. A mask mandate may make sense in Miami-Dade County, but not in Florida's more than 20 rural counties, some with fewer than 50 COVID-positive cases."

DeSantis said earlier on Monday that the state's high positivity rates are in part due to an increase in the number of tests done throughout the state. He went on to say that the median age of everybody testing positive right now is 36 and that barring comorbidities the "fatality rate is pretty close to zero."

Florida is now reporting 6,336 new cases of Covid-19, according to the Florida Department of Health. This brings the state's total to 206,447 cases and 3,778 deaths, the health department reported July 6.

The costumed attorney says he is targeting beaches because they are drawing people into the state from around the world, which is in part resulting in increased case numbers.

Since the beginning of his tour on May 1, Uhlfelder has traveled to beaches from Miami to Jacksonville, receiving at least some push back from beachgoers.

"Coming out here and dressed as the grim reaper, you know, saying 'You're dead for being out here,' I think that's a little bit much," beachgoer James Rivera told CNN at Jacksonville Beach. "Let's not give everything up because we're sick. As crazy as that sounds, it's a bit too much."

Regardless of the opposition, however, Uhlfelder has continued his tour in hopes of being "a voice for the people of Florida."

He says his main concern is not necessarily Floridian beachgoers, but rather the tourists who come from out of state.

"It's not necessarily the act of being on the beach," says Uhlfelder. "They're getting fresh air, they're exercising, and I don't have a problem with that type of conduct. It's the fact that people come to Florida to come to use our beaches."

His worry is that small towns, like his own in Escambia County, may not have sufficient infrastructure to support the surge in cases of coronavirus. The solution, he says, is statewide guidance such as the desired mask order.

"We don't have a comprehensive state plan to deal with this," he says. "The governor has decided to defer to the local areas, like cities and counties, to make the decisions, which are tough decisions."