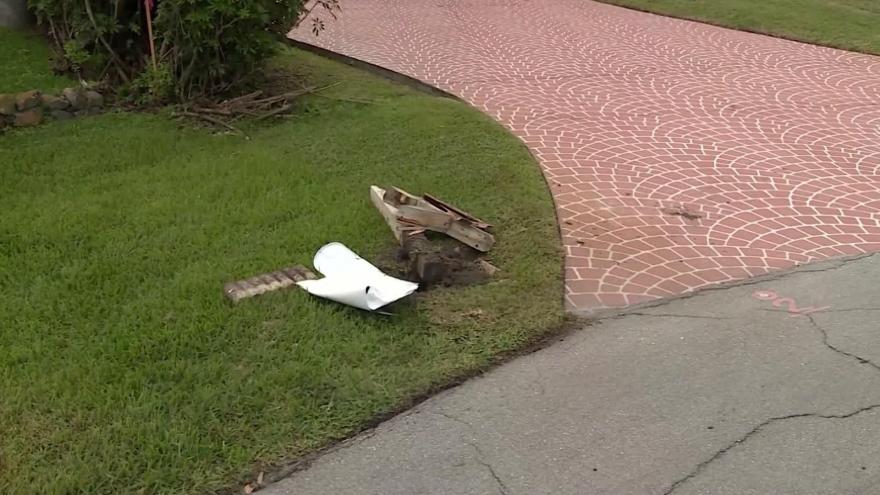 **Embargo: West Palm Beach-Ft. Pierce, FL** A dog hopped in its owner's running car, kicked it in reverse, drove in circles for an hour and smashed a neighbor's mailbox before safely exiting the vehicle without so much as a scratch.

Well, it was, until a dog hopped in its owner's running car, kicked it in reverse, drove in circles for an hour and smashed a neighbor's mailbox before safely exiting the vehicle without so much as a scratch.

But Sabol didn't know who was behind the wheel when she first spotted the car, whirling around the block like an inept student driver might.

"At first I thought I saw somebody backing up, but then they kept going, and I'm like, 'OK, what're they doing?'" she told CNN affiliate WPBF.

Then the cops came. And then the fire department. Authorities watched from a distance as the driving dog did donuts.

Finally, the vehicle hit a mailbox and some garbage cans, then slowed down.

Port St. Lucie police opened the door, and Sabol watched as a large black Labrador retriever hop out of the driver's seat.

"'OK, this is turning weird,'" she remembered thinking.

It turns out, the dog's owner, who asked to remain anonymous, had left his car running in the street when the dog changed gears and didn't stop driving for almost an hour, Port St. Lucie police said.

The community escaped injury save for the mailbox, which the dog's owner promised to fix.

As for the pup, it's impossible to know its thoughts behind the wheel. Did it jump at the chance for a joyride and a fleeting taste of freedom? Or was this all a harrowing accident as the dog felt all control slip through its paws?

Sabol, for one, was impressed.

"They should give that thing a license."