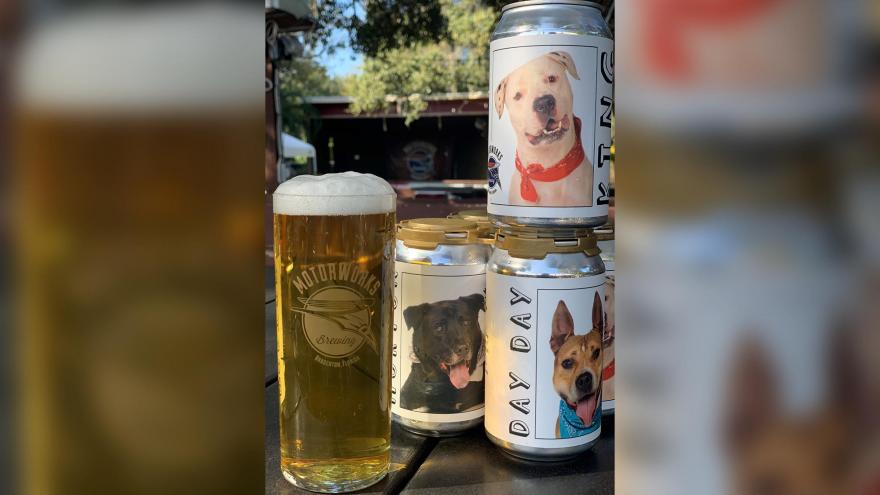 (CNN) -- A Bradenton, Florida, brewery has just given everyone participating in "Dry January" a reason to end the sober month a little bit early.

Motorworks Brewing is featuring the faces of four different smiling shelter dogs on each can of its Adoptable Dog Cruiser Kölsch -- all for a good cause.

"There's hundreds of other dogs at the shelter that are looking for homes and that's really the point. It's not just to get those four dogs adopted, it's to raise awareness and raise funds in general," Barry Elwonger of Motorworks Brewing told CNN.

Funds raised from the 4-packs and cases of 24 cans will go to Shelter Manatee to help build a new facility. But, the clever cans are already helping the four-legged Floridians find their fur-ever homes. Morton and King, two of the dogs featured on the labels of the Cruiser Golden Lager beers, were adopted on the special cans' first release day.

"This is a way of connecting good people with good beer, good animals, and good boys," said Elwonger.

The labels for the beer cans feature not only an adorable photo of each pup, but also a story about the dog and information on how to donate to the shelter. The labels were donated by Tech Label in Largo.

"The response from this project has been overwhelming. We have had countless calls and messages about the program and we are elated to have raised so much awareness (and money) for the Shelter already. We love dogs here at Motorworks Brewing and can't thank the community enough for getting behind this initiative," said Elwonger.

If you want to fetch some of Motorworks' Adoptable Dog Cruiser, you'll have to stop by their taproom. The cans are available in a 4-pack for $9 and a 24-pack case for $40.