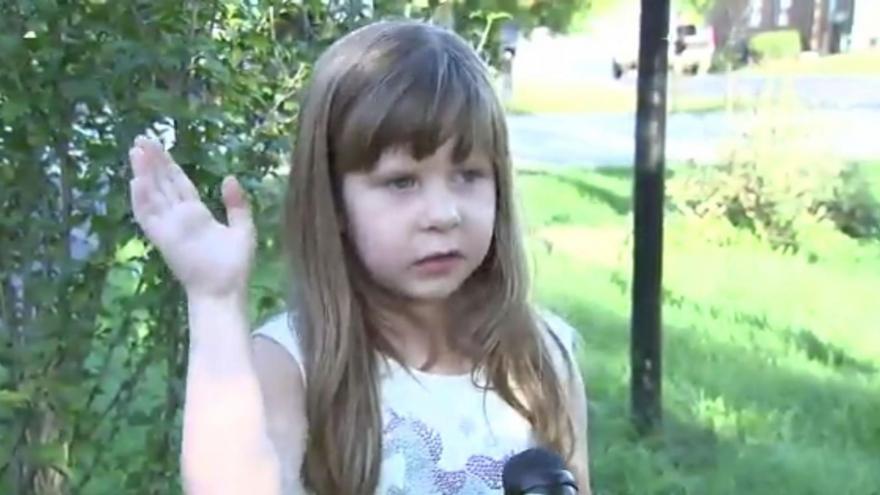 **Embargo: Chicago, IL** In the video the family posted on YouTube, the coyote can be seen behind her, creeping down the street and watching her.

(CNN) -- It was like a real-life version of Little Red Riding Hood -- except this tale involved a coyote and girl playing in her front yard.

The tense moments were all caught on her family's surveillance video in Villa Park, Illinois, on Tuesday morning.

In the video, Christine Przybylski, 5, skips out to the family's mailbox. Her mother, Elizabeth, told CNN affiliate WLS she went to see whether her Halloween costume had arrived.

After checking the mail and finding no package, Christine comes skipping back up the driveway and goes to get in the swing hanging from a tree in the front yard. In the video the family posted on YouTube, the coyote can be seen behind her, creeping down the street and watching her.

"When I went to the swing he come by and I was like, going, and then I was like 'Oh my god,'" Christine told WLS.

The coyote comes charging full speed at the young girl, who barely is able to run away from it.

The animal then turns away and disappears out of the camera's view as Christine is seen going into the house. A neighbor on a riding lawnmower is seen in the street and could be one of the reasons the animal was spooked.

Moments later, the animal is seen skulking away down the street. Christine's parents said they couldn't believe it until they watched the video.

"He really pursued her violently, and I'm so glad she got away," Elizabeth told WLS.

The coyote hasn't been trapped yet, according to Illinois Department of Natural Resources (DNR), which helps manage the preservation of wildlife. The Villa Park police contacted Illinois DNR, which told CNN they gave them information on what to do if it returns.

"Our biologists are aware of this instance and want to remind folks that urban coyotes are not an anomaly," Rachel Torbert, spokeseomsn with the Illinois DNR, told CNN. "There are more than 4,000 in Cook County alone."

Urban coyotes are more acclimated to people than rural coyotes, according to Torbert.

There hasn't been a record of a coyote bite or attack reported on humans within the state of Illinois, according to the Urban Coyote Research Project.

If approached by a coyote, the Illinois DNR had the following advice:

"If you do see a coyote and if one approaches you, wave your arms around and yell," said Torbert. "Don't run from it."

The DNR's website has other helpful tips that suggest teaching children to yell "like a monster" to scare the animal away.

Torbert also said not to feed the animal -- it's one reason coyotes have become acclimated to humans and the animal will continue to come back for more food.