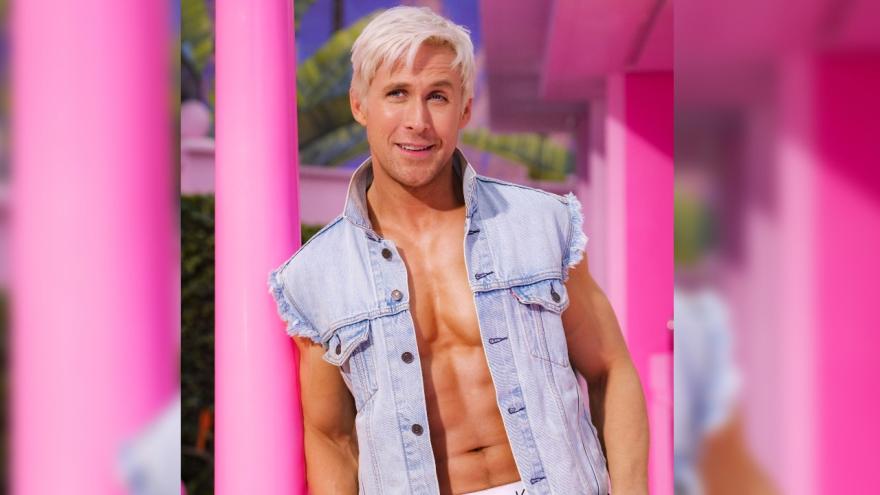 Thank goodness, then, for a snippet from the film that Warner Bros. released Wednesday on an unprepared public -- a photo of one Ryan Gosling as Barbie's tanned, toned and plastic boyfriend, Ken. (CNN and Warner Bros. Pictures share parent company Warner Bros. Discovery.)

Gosling fans, cinephiles and casual Twitter users are having a visceral reaction to the image of the Canadian actor, who stars opposite Margot Robbie's Barbie. It's the first official image of Gosling as the character made famous in the toy aisle.

Based on the photo, Gosling's transformed into the quintessential Ken: His skin is tinted orange, and he's showing off an eight-pack of abs and bleached-blond hair. His underpants are inexplicably emblazoned with his own name, and he's rocking a sleeveless denim vest without a shirt in front of a Pepto-Bismol pink backdrop. His Ken is a Malibu boy through and through.

But in terms of plot, the photo is all we've got to go on (as well as a photo of Robbie posing in-character with a pink convertible). Will Barbie tire of Ken's shirtless, vapid ways? Will Ken prove to his beloved Barb that there's more to him than an absurd amount of abdominal muscles? Or will Ken conspire against Barbie and become the villain of her story?

The sizable cast adds to the mystery of what the film could possibly be about -- it includes comedians like Issa Rae and Will Ferrell as well as rising stars Hari Nef and Ncuti Gatwa. It's rumored that some of the many cast members will be playing alternate versions of Barbie and Ken. But will any of them be Skipper?

Fans will have to wait until July 21, 2023, when the film will be released, to find out what Barbie, Ken and Will Ferrell are getting up to.