A fire near Santa Barbara has charred more than 4,300 acres and is 10% contained 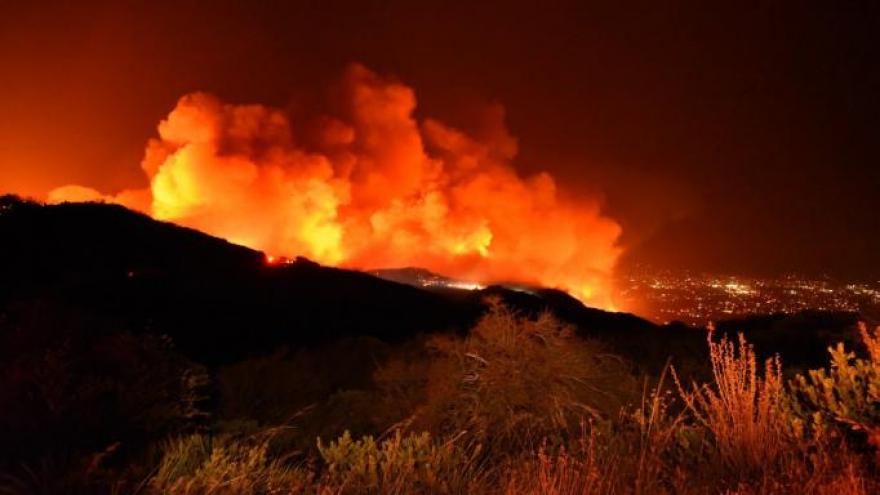 Firefighters in California were battling the flames of the Cave Fire as it scorched thousands of acres in the Santa Barbara foothills into the late Monday night hours.

(CNN) -- A wildfire raced across the dry hills above the California city of Santa Barbara on Tuesday, forcing thousands of evacuation orders and drawing hundreds of firefighters tried to stop the flames from reaching homes.

The wind-stoked fire has threatened structures including multimillion-dollar homes and ranchettes. But so far, no homes have been burned, and only one nonresidential building has been destroyed, Santa Barbara fire Capt. Daniel Bertucelli said.

More than 5,400 people were under evacuation orders in areas north of Santa Barbara on either side of State Route 154. Those orders were lifted by noon on Tuesday.

The fire jumped over portions of 154, and the flames and smoke made for terrifying moments for motorists trying to escape the area on the fire's first night.

One Twitter user posted frightening footage of a drive through the inferno, with flames coming right to the edge of the road.

"Please stay safe for anyone living close to the 154 and to the firefighters up there right now," the user said. "Just made it down safely and my eyes still can't believe what's happening."

The fire's cause wasn't immediately known.

Santa Barbara County declared an emergency late Monday, saying in a news release that the fire was beyond the capabilities of the county's firefighters to control alone.

Help has arrived from outside the county. A Los Angeles County Fire Department helicopter, for instance, dropped water onto areas near homes, "stopping those flames as they advanced on those homes," Eliason told CNN affiliate KSBY.

Fixed-wing aircraft have been dropping retardant onto the area during daylight Tuesday.

Rain is likely in the Santa Barbara area from late Tuesday into Thursday, the weather service says.

While that could help extinguish some hotspots, it also could lead to dangerous runoff -- debris and mud flowing across freshly burned areas onto roads, Eliason told KSBY.

Because runoff could flow onto the 154 highway, Eliason suggested that commuters consider approaching Santa Barbara via US 101 instead.

"It doesn't take a lot to impact 154 on a normal rainy day, but with all this (potential) runoff, it's going to create a big problem for drivers," he told KSBY.

Some lesser lines have been intentionally powered down because of the fire, Eliason told KSBY. About 1,500 customers were without electricity service Tuesday morning, according to the outage-tracking website poweroutage.us.

While California utilities in recent months have proactively cut power to lessen the chances of wildfires during harsh weather conditions, Santa Barbara's outages were not planned before the fire happened, county officials said.

Santa Barbara City College canceled classes Tuesday and Wednesday because of the fire, as a precaution. Primary and secondary schools in the area already were closed this week for Thanksgiving break.