'A fight between good and evil': The Klitschko brothers on the battle for Ukraine 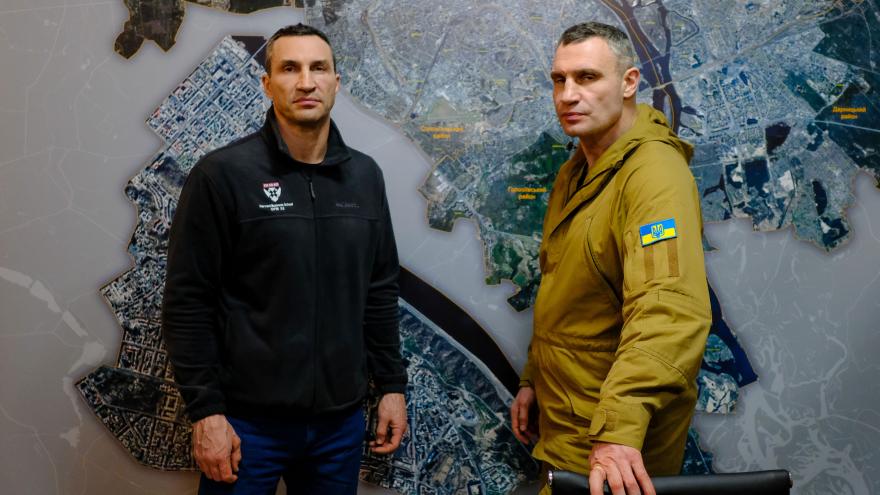 By Vasco Cotovio, Frederik Pleitgen and Byron Blunt, (CNN) -- Kyiv Mayor Vitali Klitschko scratches his head after a conference call with another foreign leader, the bags under his eyes revealing the sleepless nights the Russian assault on the Ukrainian capital have afforded him.

"This is our homeland, we have to be here," he told CNN, in an exclusive face-to-face interview at an undisclosed location on Wednesday.

Beside him, his brother Wladimir shares a similar feeling.

"Our roots are here, our relatives are buried in the ground here, in Kyiv," Wladimir said. "Our relatives, our friends, every single street brings back memories."

The pair, legendary athletes and former world boxing champions, said they didn't sleep for the first two days of the Russian invasion. One month on, they've adjusted, sticking together and using their international clout to muster international support for Ukraine.

"We need support and help from our allies, we need a lot and it's almost never enough," Wladimir added.

As NATO leaders gathered in Brussels on Thursday, he was clear about what he wanted for Ukraine: "We definitely need to close our sky."

"Our civilians, and our cities are getting destroyed and it's continuing while we're giving this interview and speaking about it, the fights are still going on," Wladimir said.

But NATO has been unwilling to implement a no-fly zone over his country, so now he's asking the alliance to give Ukraine the means to do it by itself.

"If you supply us with defensive weapons, we're going to close the skies on our own," Wladimir said.

"We have enough men and women that are going to stand for the country and will defend it as strong(ly) and as much as possible," he added. "We're going to close the sky on our own, we just need the defensive equipment for that."

Ukraine has received a lot of defensive lethal aid from the United States and other NATO allies already and more is either arriving or on the way. It's one of the reasons the Ukrainians have been able to mount such staunch resistance to Russian President Vladimir Putin's forces.

"With our friends we are much stronger," Vitali said, thanking US President Joe Biden in particular, with whom he said he has a "good" personal relationship.

The two met in 2015, when Biden was the Vice-President and in charge of the United States' Ukraine policy, and have remained in contact ever since.

"Unity around Ukraine is a key for freedom, it's a key for peace in our home country. It's very important to have friends who support Ukraine and one more time thank you so much for (your) support," Vitali said.

But support for Ukraine has to be a two-pronged approach, the brothers said, as they called on the West to sever all economic ties with Russia -- even if it means paying steeper prices for oil and gas.

"Obviously, the world needs oil and gas, but it's better to pay (a) higher price than to pay with lives for that oil," Wladimir said. "One more time, anything that you economically do in trade, or exchange with Russia, you're getting products, you're getting gas, oil, the ruble, whatever it is, just stop doing it."

"You will save lives," he added. "This way, we will isolate (Putin), make him weaker and just show that international law cannot be broken."

The Ukrainian capital has been one of the main targets of Putin's invasion, with Russian troops continuing to try to encircle Kyiv. At the start of the conflict, US and NATO officials said they believed Moscow's goal was to capture the capital and "decapitate" the government, in order to achieve a swift end to the war.

Four weeks later, Ukrainian forces are not only keeping Russian troops at bay, they are making gains around Kyiv.

The Klitschko brothers understand why the strength of Ukrainian resistance in the face of Russia's mighty army might have shocked many, but are not themselves surprised.

"This is why Ukrainian soldiers are so tough."

Part of the defense of the capital has been put in the hands of Territorial Defense Forces, which despite being officially integrated into the Ukrainian military, are composed of people with little or no military experience. The mayor's office has had to organize this militia but Klitschko rejects any credit, instead pinning its success on ordinary Ukrainians who stepped up.

"We didn't need to organize anything. I meet people at checkpoints and they come from very peaceful professions. These people are artists, musicians, doctors, who have never even thought to wear a uniform or pick up weapons," Vitali said. "But right now they're on the street and ready to fight, ready to defend the future of our children, defend freedom in Ukraine."

Ahead of the invasion, Putin accused the Ukrainian government of persecuting Russian speakers, using it as a justification for the attack.

However, Moscow's armies have faced strong opposition even in areas where the majority of the population speaks Russian.

Most have lined up to contribute and help their country in any shape or form.

"Our will is stronger (than) any army and any weapon and that's why we will succeed and defend our country," Wladimir said.

Ready for the ultimate sacrifice

Despite Ukraine's initial relative success, the situation across the country continues to be incredibly precarious. Throughout the 30-minute-long conversation, shelling and rocket launches continued around Kyiv and across Ukraine. Missiles fell in multiple towns and firefights ensued.

"Nobody can feel safe in Ukraine right now," Vitali said. "At any second there could be a bombing attack, a rocket could fall."

"At any second, every Ukrainian is at risk of dying," Vitali added, knowing full well that this also applies to the two brothers.

Like President Volodymyr Zelensky, Ukrainian officials have said Vitali and Wladimir Klitschko are high profile targets for Russian infiltrators seeking to destabilize leadership in the capital.

The brothers, like many Ukrainians, say they have overcome whatever fear they may have had.

"We're in Ukraine. We stay with Ukraine, we stay for our future. And we are ready to defend it," Vitali said. "It's a privilege to die to defend your hometown, your home country."

His brother has also adjusted to that new reality, drawing on what he perceives to be the righteousness of their cause.

"Truth is on our side," Wladimir said. "This pretty much reminds me of a fairy tale."

"It's a fight between good and evil."