A FedEx driver jumped off a bridge to avoid an oncoming truck and fell 75 feet. He survived with a few broken ribs 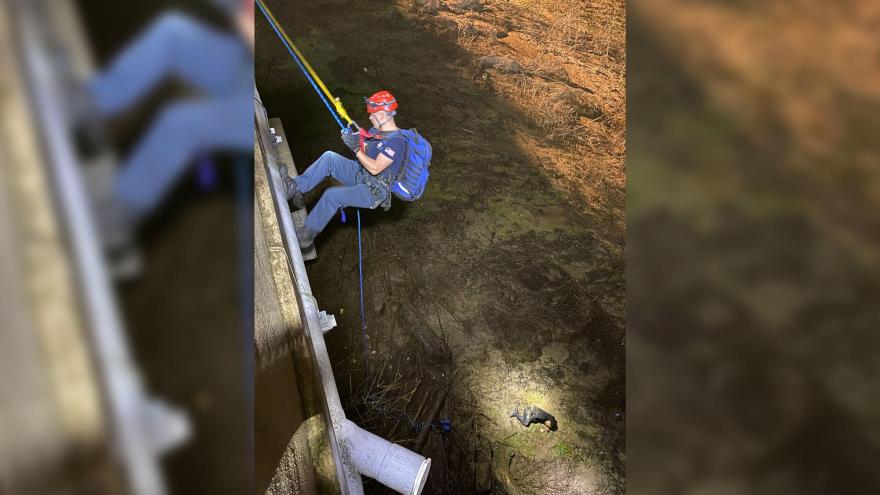 A Salisbury firefighter made a daring rescue of a 24-year-old man who jumped off a bridge and fell 75 feet. He'd been run off the road by an oncoming tractor trailer. Somehow, he survived and suffered only a few broken bones and collapsed lung.

(CNN) -- Jeremiah Cribb was only trying to fit a good deed into his overnight driving shift.

He ended up falling 75 feet off the side of a North Carolina bridge -- but survived, somehow, and walked away with a few broken ribs.

Cribb, a 24-year-old FedEx driver, spotted a driver stalled along a bridge in Salisbury. He jumped out of his truck to assist them and turned on his hazard lights to warn oncoming cars.

Then he saw an 18-wheeler headed straight toward them.

"We didn't know if [the driver of the tractor-trailer] was going to hit the car, but I kind of had a feeling that he was," he told CNN affiliate WSOC.

Just as the tractor-trailer was about to collide with the stalled car, Cribb jumped over the side of the bridge. He assumed there'd be a grassy median to meet him on the other side.

Instead, he plunged 75 feet down onto a hard sandbar below.

"I just reacted," he told the Salisbury Post less than one day after the fall. "It's pitch-black dark. I was thinking I was hopping over a median. I just started free-falling."

He stayed still, afraid to move in case he'd seriously injured himself.

"I thought I broke my back," he told the Salisbury Post. "I moved my neck. I moved my legs. I crawled to my phone to call 911 and the police were already there."

When Salisbury firefighter Jacob Vodochodsky rappelled down the bridge to reach him, he saw Cribb in the fetal position. He feared Cribb couldn't move.

"I gave him a little pinch on the leg because the way he was laying there looked like he may have been paralyzed from that great of a fall," Vodochodsky said at a news conference.

Eventually firefighters helped a dizzy Cribb on his feet and back up the bridge. Somehow, fire officials said, he'd missed the hard roots and logs below that could've killed him -- a vat of mud broke his fall.

He was taken to a nearby hospital with serious injuries, but ultimately, Cribb got off with three broken ribs and a collapsed lung.

Physicians who treated Cribb told him under any other circumstances, he likely would've died.

He'll spend the next few days in the hospital recovering from his injuries -- and "trying to wrap [his] head around" his remarkable survival, he said.