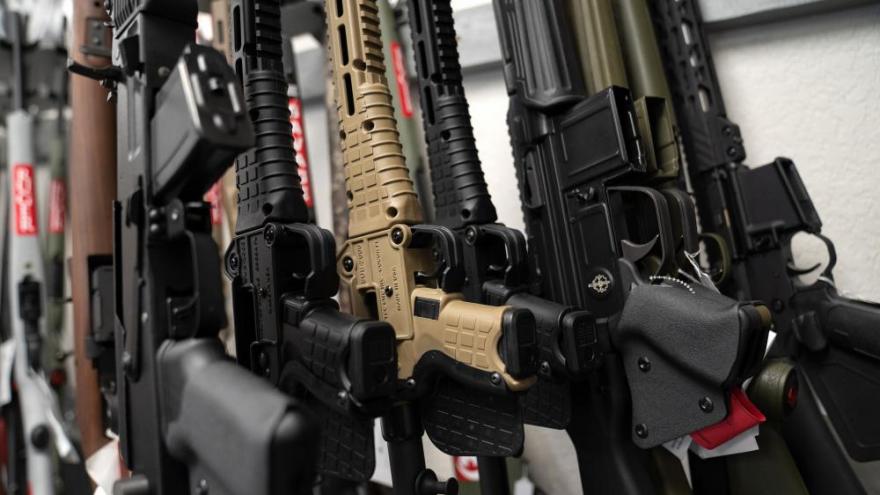 In a ruling that compared the AR-15 to a Swiss Army knife, a federal judge overturned California's longtime ban on assault weapons on June 4, ruling it violates the Second Amendment's right to bear arms.

(CNN) -- A federal judge overturned California's longtime ban on assault weapons on Friday in a ruling that likened the AR-15 to a Swiss Army knife.

Assault weapons have been banned in California since 1989, according to the ruling. The law has been updated several times since it was originally passed.

According to the ruling by US District Judge Roger Benitez of San Diego, the assault weapons ban violates the Second Amendment's right to bear arms and deprives Californians from owning assault-style weapons commonly allowed in other states. Benitez issued a permanent injunction Friday so the law cannot be enforced.

In his ruling, the judge also criticized the news media, writing, "One is to be forgiven if one is persuaded by news media and others that the nation is awash with murderous AR-15 assault rifles. The facts, however, do not support this hyperbole, and facts matter."

Still, an AR-15 style rifle has been the weapon of choice for the most violent mass killings in modern history, including in a movie theater in Aurora, Colorado; the Tree of Life synagogue in Pittsburgh; the Route 91 Harvest musical festival in Las Vegas; a massacre at a church in Texas; the Pulse nightclub in Orlando; a high school in Parkland, Florida; and the Sandy Hook Elementary School in Connecticut.

Judge Benitez has previously ruled against other state firearm restrictions. Last year, he ruled California's ban on high-capacity magazines was unconstitutional. He also struck down the state's restriction on remote purchases of gun ammunition.

The comparison of the AR-15 to a versatile pocket knife favored by campers drew sharp criticism from California officials including Gov. Gavin Newsom, who called the AR-15 a "weapon of war."

The comparison, he said in a statement, "completely undermines the credibility of this decision and is a slap in the face to the families who've lost loved ones to this weapon."

Newsom added: "We're not backing down from this fight, and we'll continue pushing for common sense gun laws that will save lives."

The ruling and injunction are stayed for 30 days, during which time the attorney general may appeal and seek a stay from the Court of Appeals.

"There is no sound basis in law, fact, or common sense for equating assault rifles with swiss army knives -- especially on Gun Violence Awareness Day and after the recent shootings in our own California communities," his statement said.

A White House spokesperson said in a statement, "Courts have again and again held that an assault weapons ban does not violate the Second Amendment, which is limited. The President continues to press for commonsense laws to reduce gun violence - including a ban on assault weapons and high capacity magazines."

Fred Guttenberg, a gun safety activist whose daughter was killed in the Stoneman Douglas High School shooting in 2018, denounced the judge's comparison.

Guttenberg also called Benitez a "liar" and an "activist judge."

Asked for his reaction on Guttenberg's remarks, Benitez told CNN in an email he is "prohibited from publicly commenting on pending cases."

Also on Saturday, Richard Martinez, whose son was killed in a 2014 California mass shooting, spoke to CNN's Fredricka Whitfield and rejected the judge's conclusion that assault weapons like the AR-15 are "fairly ordinary, popular, modern rifles."

"It is a devastating blow to survivors and all the families," said Judy Weldon, a teacher who survived a 1989 shooting at an elementary school in Stockton, California. "His whole ruling is terribly flawed."

Weldon called the judge's decision "grossly irresponsible," adding there was no reason for assault weapons "to be in the hands of ordinary citizens."

"Look at how many people in our country are dealing with trauma from gun violence," she added.

Tina Meins, whose father was killed in the mass shooting in San Bernardino in 2015, said the pain she and other families have suffered because of these weapons shouldn't have to continue.

"He likened in his ruling the popular AR-15 rifle to a Swiss army knife, which is a false equivalence and insult to common sense," she told CNN. "I'm certain that every person that's lost a loved one to gun violence or has been threatened or wounded by a gun immediately recoiled at such an obtuse comparison."

Calling the existing state law "tyrannical," the pro-gun Firearms Policy Coalition said it was a first step in "restoring" gun rights across the country.

"In his order today, Judge Benitez held what millions of Americans already know to be true: Bans on so-called 'assault weapons' are unconstitutional and cannot stand," said FPC President Brandon Combs. "This historic victory for individual liberty is just the beginning, and FPC will continue to aggressively challenge these laws throughout the United States. We look forward to continuing this challenge at the Ninth Circuit and, should it be necessary, the Supreme Court."

The National Rifle Association called the judge's decision "well-reasoned and principled" and said it "demonstrates the importance of appointing judges who accurately apply the original meaning of our Constitution."

"Judge Benitez highlighted what all gun owners know: these types of restrictive gun laws don't make anyone safer and infringe on the rights of law-abiding Americans. We look forward to the positive impact this ruling will have on current and future Second Amendment cases," NRA spokesman Lars Dalseide said in a statement to CNN.