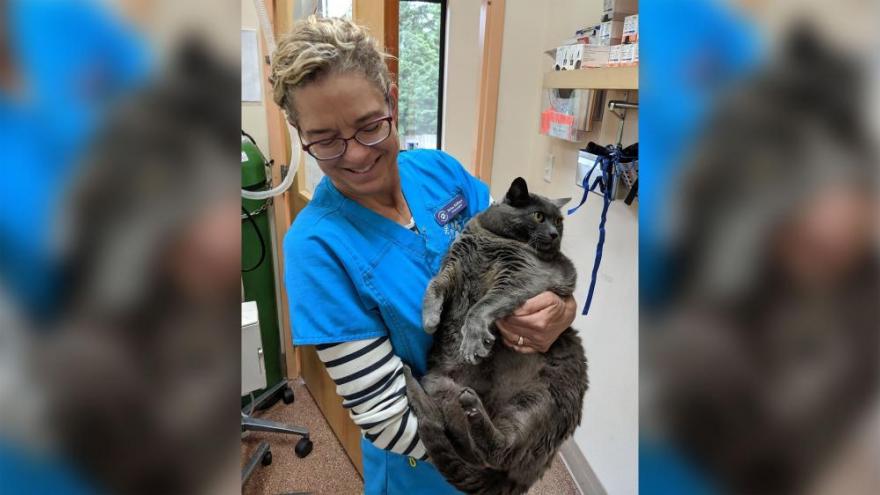 Cinderblock's workout video was the inspiration for a Twitter trending topic Friday night.

(CNN) -- A 25-pound cat from Washington has won over the internet with her purrfect workout routine.

Videos of Cinderblock, a gray domestic shorthair, captured the attention of Reddit and Twitter users Friday after she was seen using the last of her nine lives to get in shape.

Cinderblock's previous owner couldn't take care of her any longer and had brought the 8-year-old feline to Northshore Veterinary Hospital in Bellingham near the Canadian border to be euthanized, medical director and veterinarian Brita Kiffney told CNN. The previous owner was struggling with health issues and caring for her father, who suffers from dementia, Kiffney said.

"I couldn't do it and asked her to relinquish her to me," Kiffney said about Cinderblock. "She agreed and was grateful, as she really didn't want to euthanize Cinder but was overwhelmed with the care of her father. So, she is morbidly obese, due to overfeeding by the father."

At Northshore, Kiffney and other staff members have used an underwater treadmill to help provide physical rehabilitation to Cinderblock. The hospital shared a Facebook video of Cinderblock meowing while lazily using the treadmill on October 19. The video has been seen more than 2.2 million times. It and subsequent videos also found their way to Reddit's front page.

Cinderblock was the inspiration for a Twitter trending topic Friday night. Artist Alex Plante, 28, from Winnipeg, Manitoba, created a series of Cinderblock illustrations that have been liked and retweeted thousands of times.

"I think she's going viral because she may be the most relatable cat I've ever seen," Plante told CNN. "Who hasn't cried on a treadmill at some point in their lives? I also think people love a feel-good story and the vets at Northshore Veterinary Hospital are doing such a lovely job working with her. They're clearly super kind and caring people."

Kiffney also attributes Cinderblock's newfound viral fame to how much people relate with not wanting to exercise. She hopes Cinderblock's plight inspires people to keep their pets healthy.

"We are hoping to raise awareness of pet obesity, as nearly 60% of pet cats are either overweight or obese," Kiffney said. "Many people do not realize their pet is overweight."