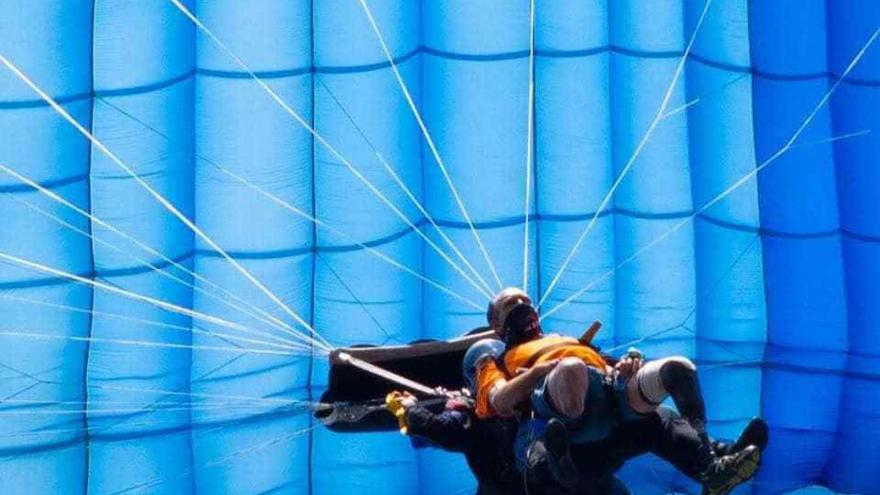 Chris Marckres' right leg fell off during a tandem skydiving jump in Vermont.

(CNN) -- Chris Marckres was coming in for a landing on his first-ever skydiving jump when he realized something was missing.

Marckres, who lost both of his legs to complications from diabetes, told CNN that his right prosthetic slipped off on Saturday during the 10,000 foot drop from the plane to the landing zone in West Addison, Vermont.

"I never knew. I think my adrenaline was up so much it just wasn't my focus," he said. "I was paying attention to everything else and just enjoying it."

The two-month old leg cost $20,000, and Marckres didn't think his insurance company would pay to replace it. That meant he would have had to use a wheelchair instead of walking on his own and that getting to his dialysis appointments three times a week would have been a challenge.

The 47-year-old went on Facebook and asked people to keep an eye out for the leg, but he wasn't very optimistic.

But one day later, Marckres received news from Joseph Marszalkowski, a farmer who had seen his post. He had found the prosthetic leg on a 110-acre soybean field.

Dozens helped in the search

Marckres's post was shared widely in the area. About a hundred people came to help him search, he said.

A woman with law enforcement experience came to help coordinate the effort and a man who trains search and rescue dogs came to search too, Marckres said. Some hopped on ATVs and dirt bikes, others joined by foot.

"The response was just overwhelming, literally hundreds of hundreds of text messages of people offering 'what can we do to help do to help?'" he said. "It really is a humbling experience. It kind of restores your faith in humanity that there's still so many truly good people in the world that are willing to help a complete stranger."

Meanwhile, Marszalkowski -- who farms the fields around the skydiving facility -- began his own search after seeing the post on social media.

He said his brother once found a skydiver's wallet and was able to return it.

So on Sunday evening, the farmer searched the 110-acre soybean field near where the skydiving planes land. He used his drone until its battery ran down and then walked around in the tall grass and waist-high soybeans for about three hours until it started to get dark.

He gave up for the night. But as he was walking back to his truck, he spotted the dark gray leg in the grass.

"Honestly, it was kind of sheer luck that I picked that field and I was able to find it for the man," he told CNN. "I'm happy, and I'm really proud to have been given the opportunity to do the right thing for this man."

Marszalkowski sent Marckres a picture of the leg, and they made arrangements to meet up on Monday, so he could return it.

The leg barely had a scratch on it, and Marckres said he was able to put it right on and wear it home.

Marckres insisted on giving a reward, but Marszalkowski didn't want to take it.

"He made me take a reward and he was not taking no for an answer," Marszalkowski said.

As a compromise, Marszalkowski said he'd take the money to help pay for his own skydiving trip, as long as Marckres goes with him. They're planning to jump together sometime in the Fall.