A family thought they were just baking a pizza. Then they found a snake inside their oven 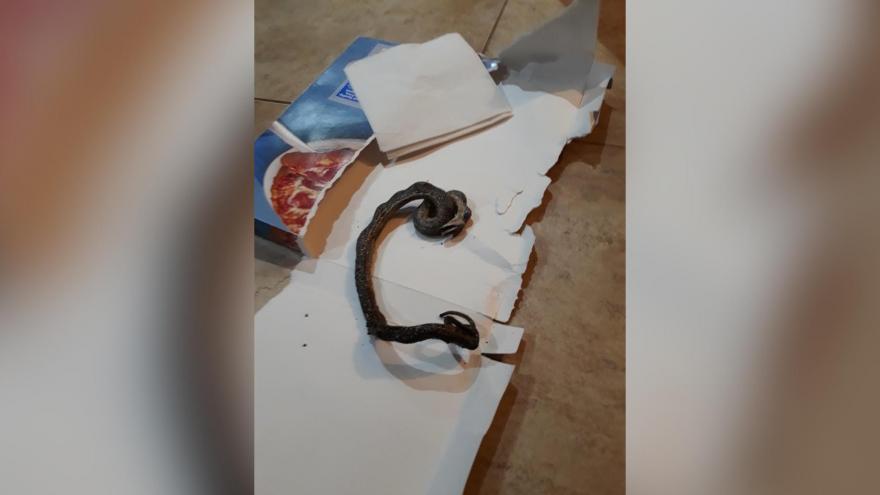 The Helm family was shocked when they found this inside their oven.

(CNN) -- A family in North Carolina thought they were just making themselves some dinner, but there was something else in the oven with the frozen pizza.

Amber Helm's husband Robert went to preheat their oven Monday night for what she said she thought would be an easy dinner. Once it had heated, Robert popped a frozen pizza in.

The Helms noticed smoke in the kitchen of their Wake Forest home before realizing there was a snake in the oven, according to CNN affiliate WRAL.

"The oven started smoking and I told my boys 'back up' so I can make sure a fire or anything didn't happen," Amber Helm told WRAL. "I looked closely and was like 'Oh my God! That's a friggin' snake.'"

The family doesn't store anything in the oven when it's not being used so they never thought to check inside before preheating, according to Helm.

"The oven was dark and the snake was likely dead by then from the preheat," she told CNN. The last time the family used their gas oven was on Christmas Day to cook a ham.

"It got in via the holes at the bottom that allow for airflow," Amber Helm said. "We aren't certain yet how it got into the house but assume through our crawl space."

The Helms have two small children. Their 3-year-old shared their shock while the 1-year-old was left unsure of what had happened.

"I immediately got them out of the house and took them to Applebee's while my husband stayed home and got rid of the snake and a started to air out the house and clean the oven," Helm said.

The Helms just moved into their home last January and said the neighbors across the street own a horse farm and told them they never had any issues like this before.

"I was queasy and it was creepy," Robert Helm told WRAL. "There's nothing good about finding a smokey snake in your oven."

A local company is coming by the Helm home next week to make sure their future is snake free.