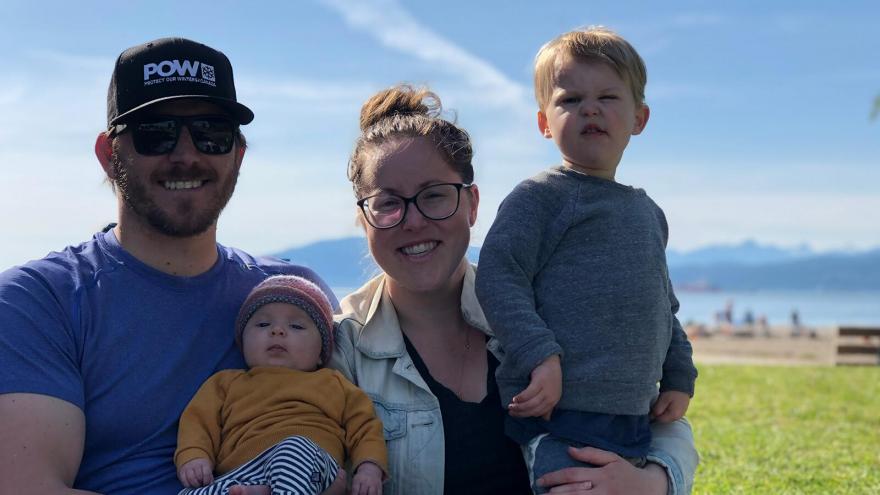 Lucy, her parents Scott and Laura Van Doormaal, and her 3-year-old brother Sullivan.

(CNN) -- A Canadian family that spent months frantically raising millions of dollars for a one-time gene therapy treatment to save their daughter's life has received the treatment for free.

After her family raised nearly $2 million to pay for a potentially life saving treatment, administered as a one-time infusion into a vein, Lucy was randomly selected by drug company Novartis Gene Therapies to receive the treatment for free through its Managed Access Program (MAP).

"We were totally shocked, we didn't expect this outcome but we were just so happy because our single goal was providing the treatment to Lucy," Laura Van Doormaal, Lucy's mom, told CNN. "This has been a traumatic experience, having to fight for treatment and put our life out there to fund it, so this is really a relief."

SMA is an inherited disorder stemming from a defective gene that leads to the death of nerve cells responsible for moving the muscles that allow people to walk, talk, breathe and swallow, according to the National Institute of Neurological Disorders and Stroke.

Lucy has type 1 SMA, the most aggressive and severe form of the disease which leaves her nearly unable to crawl, swallow or even breathe. Lucy's only chance of surviving past her second birthday was Zolgensma, one of the only approved treatments for SMA.

Another chance of survival

"We noticed an immediate difference. The biggest changes are her head control, really quickly after the treatment she was able to hold her head up which is something she's never done before. She can sit with some support and hopefully one day she'll crawl," Van Doormaal said.

"Maybe one day she'll even walk. That's really an optimistic dream, I know, but we like to have high expectations and we don't want to hold her back."

The gene therapy treatment, which comes with the hefty price tag of $2.125 million, alters the patient's biology -- but it's still not a guaranteed cure.

Zolgensma replaces a working copy of the defective gene into those nerve cells before they die and symptoms develop.

The treatment is available in the US and other countries, but is not yet approved in Canada. However, British Columbia Children's Hospital was able to provide Lucy with treatment, Van Doormaal said.

In 2020, Novartis launched a Managed Access Program to provide 100 eligible patients with SMA under the age of 2 in countries where Zolgensma is not approved.

"While we aren't providing specific numbers at this time, we can confirm that already the program has enabled children across Asia, Australia, Europe and North America (including Canada) to receive treatment who may not have otherwise had access to the therapy," a Novartis Gene Therapies company spokesperson told CNN.

Learning to live with SMA

She was a perfectly healthy baby until two weeks later, when Lucy's parents began to notice her struggling to breathe and move her arms. When she was no longer able to bring her thumb to her mouth, they knew something was very wrong.

"When we first took her home, we were in newborn bliss. Just absolutely in love with her. She was a great baby," Van Doormaal said. "But we started to realize her movement was declining. She had trouble breathing and eating. When she was five weeks old, she was diagnosed with spinal muscular atrophy."

Since SMA results in severe respiratory issues, Lucy sleeps hooked to a BiPAP (Bilevel Positive Airway Pressure) machine, a non-invasive ventilator, to help her breathe. Her family also uses an oximeter to monitor her pulse and blood oxygen levels.

Because Lucy has lost the ability to feed on her own through her mouth, she has also undergone surgery to receive a gastrostomy tube.

While every child responds differently to Zolgensma, there is a chance Lucy will be able to outgrow the gastrostomy tube. She may also be able to hit other critical milestones, like sitting, rolling, crawling and maybe one day even walking. It might also strengthen her breathing and swallowing muscles, which will have the biggest impact on her quality of life.

"Now that we got the treatment we can focus on her recovery and her progress and enjoying her as a baby, but we also now have to face the grief we are feeling from the diagnosis and process what our new life looks like," Van Doormaal said. "These are all healthy things that needed to happen, so we definitely feel so much more hopeful about our future."

The money raised through the family's GoFundMe has been donated to other babies with SMA who needed Zolgensma as well as a few charities, with the rest of the funds going towards Lucy's future medical needs.