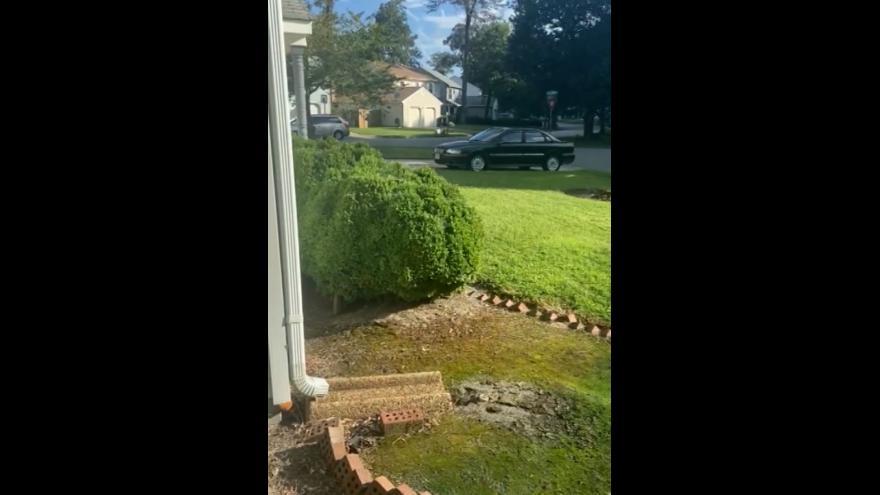 A general view of Jannique Martinez's neighborhood is seen in Virginia Beach, Virginia, on September 24.

(CNN) -- When the Martinez family moved into their new home in Virginia Beach, Virginia, five years ago, they had dreams of raising their children and making a life in their new neighborhood cul-de-sac.

"The minute we found this home, I loved it," Jannique Martinez told CNN. "It was everything I envisioned for my family and for raising my kids in a nice, quiet neighborhood."

Now Martinez, who is Black, says a neighbor's music, racial slurs, blinking lights and monkey sounds have made her family's lives miserable.

"I'm not going to lie, if I had any imagination it would be like this, we would have not bought this house. I would never sign up for this," she said.

According to Martinez, the harassment began with blinking lights.

"We noticed a little erratic behavior like these blinking lights that are on a sensor. When my family or any other family leaves or returns to their homes, they all start to blink," Martinez said. "When the sensors are activated, loud music begins to play. He switches the music based on the family that is activating the music."

Martinez added that there are multiple cameras on his house.

"We are all on surveillance 24/7 with cameras in every direction of his home," she said.

Most recently, Martinez said, the music switched to monkey sounds.

"My husband parked his truck on the street in front of his house, which is city property, and instead of music, he started playing monkey noises," Martinez said.

Martinez says the neighbor plays the monkey noises whenever they arrive or depart their home.

Following recent phone calls to the local police by the Martinez family complaining about the noise and the lights, Martinez says the neighbor's actions escalated.

"The situation is truly heartbreaking," she said.

Police told CNN said they are "acutely aware of the ongoing situation."

"The observed conduct has been reviewed with the City Attorney for potential criminal sanctions; however, it was determined that the activity, though appalling, is not criminally actionable," the Virginia Beach Police Department said in a statement.

"He finds ways to stay under the law," Martinez said. "He can't be wrong in the eyes of the law. He doesn't care about the morals."

"It feels hopeless and sad. I'm so drained," she said.

CNN has contacted the neighbor for comment but did not hear back.