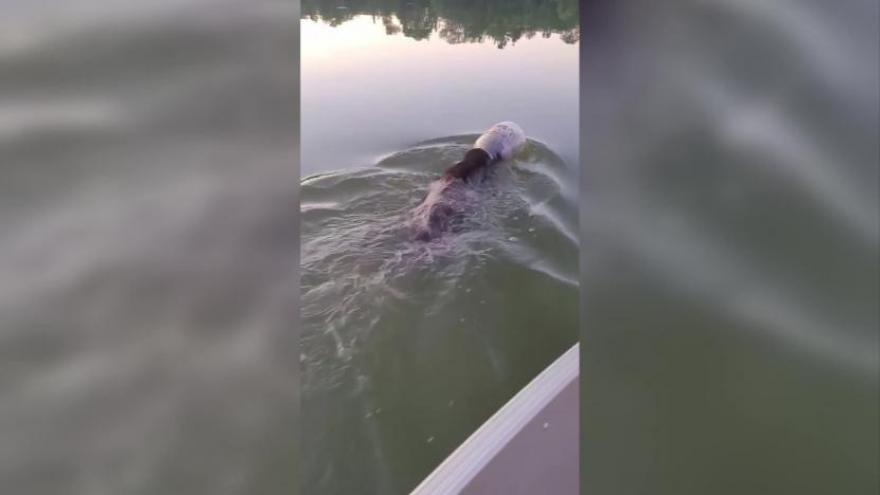 (CNN) -- A Wisconsin family rescued a young bear after it got a plastic cheese ball container stuck on its head.

Tricia Hurt, her husband Brian, and their son Brady were out fishing on Marsh-Miller Lake on Sunday when they came across the distressed black bear.

"We knew that if we didn't do something, we are pretty sure it would not have made it to shore," Tricia Hurt told CNN. "It was really huffing and puffing, my husband said."

The family came up behind the bear, and Brian pulled on the tub but lost his grip -- but he realized the bear's ear was loose. They looped the boat back around, and after a final tug the bear was free and swam safely to shore.

"We were so excited! We did our good deed for the day. We will never ever do this again, and it felt good to help the poor bear. You don't like to see animals struggle," Hurt said.

When they got back to the resort bar, word of their courageous act had already spread thanks to some campers watching on the shore.

The Hurts learned from people at the bar that the bear had been running around with the tub on its head for three to four days.

The Wisconsin Department of Natural Resources had been contacted several times but had been unable to locate it thanks to the rural, wooded landscape, Hurt said.

"We weren't going to put the video up," Hurt said. "But we wanted everyone to know that the bear was OK."

Since Hurt posted the video to her Facebook on Sunday, it has amassed almost 800,000 views.