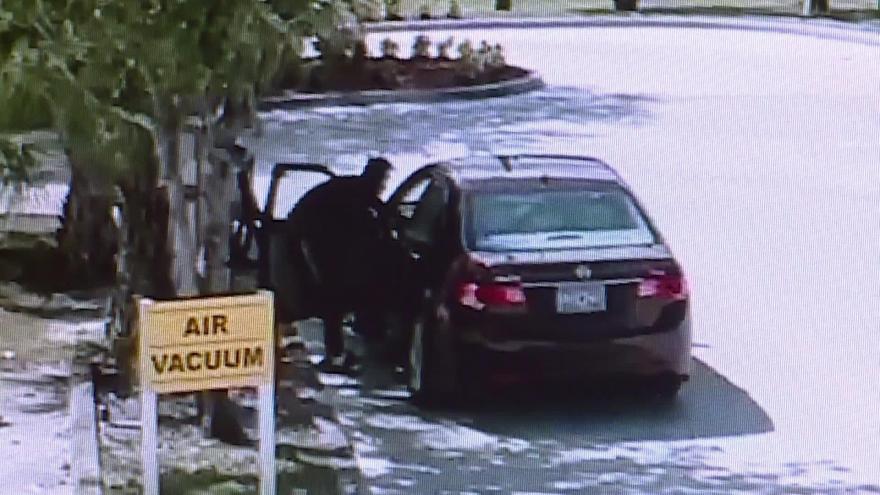 A suspect was arrested Monday, accused in a violent carjacking and kidnapping Sunday in Palm City, Florida, authorities said.

(CNN) -- A drive home from the happiest place on Earth turned into a nightmare for one family.

Jaime Sagona was driving her brother, her mother and her infant back home to Miami early Sunday afternoon from Disney World in Orlando. Tired from the drive, she pulled over at a gas station in Palm City, Florida, for a bit of rest, Martin County Sheriff William Snyder told CNN affiliate WPBF.

That's when an armed man carjacked their vehicle in a violent incident that was captured by a nearby security camera video. The suspect tried to pull Sagona out of the car, but she fought him, the video shows.

"The guy yanked her out of the car and was fighting with her, and she did not want to go," Joanne Sagona, Jamie Sagona's mother, told WPBF. "And I said, 'Get out. Listen to him. Don't fight him. Listen to him.' I was trapped in the back with the baby."

The man eventually yanked Jaime Sagona out of the car while her brother, Andrew Sagona, got out of the vehicle's passenger side, the video shows.

Jaime Sagona tried to get back into the car, but the carjacker punched her and knocked her to the ground before driving off with her mother and child in the back seat, the footage shows. Jaime and Andrew Sagona tried in vain to grab a hold of the car as it sped away.

"That was a mama bear. And she was responding to the fact that she had a newborn, a 4-month-old, in the back seat," Snyder told WPBF.

Inside the car, Joanne Sagona watched as the carjacker pointed the gun at the baby, she recalled to WPBF, and she begged him to pull over so she could escape with the child.

"You're not going to fight with someone as he's pointing the gun at the baby," Joanne Sagona told the station. "It was going to kill somebody. The only chance we had was to get out."

About a mile down the road from where the carjacking took place, the man pulled over and let them out, according to WPBF.

Asked what he'd say to the victims, Jean replied, "I'm sorry," while being led Monday into the sheriff's office, video from WPBF shows.

The sheriff's office did not immediately respond to CNN's request for more information. It was not immediately clear whether the suspect has an attorney or has entered a plea.