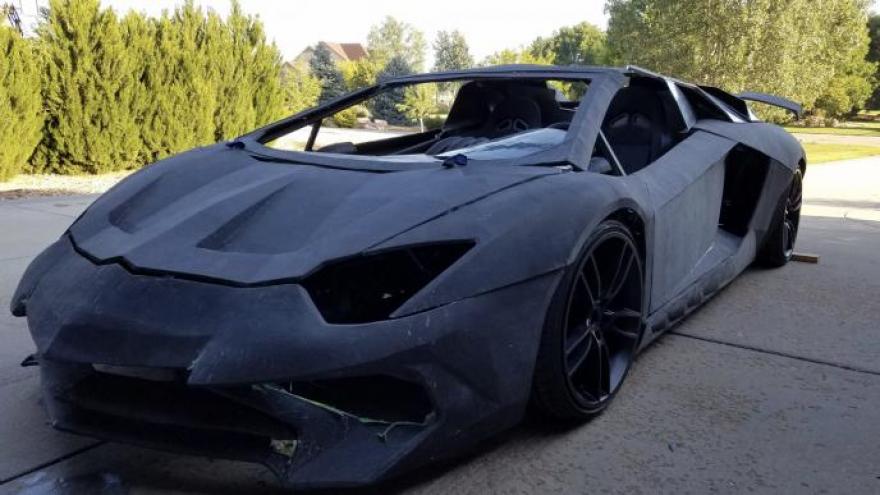 (CNN) -- What started out as a simple game between a father and son turned into a Christmas surprise of a lifetime from Italian supercar maker Lamborghini for a family from Erie, Colorado.

Sterling Backus, 54, and his 12-year-old son Xander were playing the racing simulation video game "Forza Horizon 3" one day when Xander asked his father if they could build their favorite car: a Lamborghini Aventador.

Backus, who is a physicist at Thorlabs, told CNN that he "has always been a Lamborghini guy" and that he did not hesitate when his son asked.

The two started planning out their ambitious project in February 2018, and it resulted in a surprise call two months ago from Katia Bassi, who is the chief marketing officer of Automobili Lamborghini.

"I was shaking in my boots since it was like getting a call from the Pope and he is coming to dinner," Backus told CNN. "Of course, a metaphor, but just to give (you) the idea of the gravity to me, personally."

Bassi told Backus that the company wanted to shoot a holiday commercial with his family. In addition, they were going to loan them a real Lamborghini Aventador S for two weeks.

Last year, 649 Lamborghini Aventador units sold last year, according to the carmaker. The Aventador S Roadster loaned to the Backus family is priced at approximately $460,247.

Backus said that he drove the Aventador every day and that "their amazing generosity will never be forgotten."

While Lamborghini is against the counterfeiting of its cars, the Backus' project is a tribute car for a STEM (Science, technology, engineering and mathematics) project that is not marked as a Lamborghini and is not being sold as such, which is why Sterling believes the company was OK with their project.

Backus used a toy model that he enlarged in 3D-drafting software Solidworks to help 3D print many of the parts used in their project car.

Using desktop 3D printers such as a QIDI X Pro, they were able to 3D-print many of the parts used in the car. But Sterling said that nearly every part of this project has been challenging for the father-son team.

To date, Backus has spent approximately $23,000 on this project, and they are targeting August for a local big car show to unveil the finished project.

"The experience showed me how many people out there are just good folks, and it was oozing Christmas spirit," Backus said. "We will never forget what gifts we were given, and the majority was friendship!"