A 'dream' deer hunt with Donald Trump Jr. is being auctioned by a trophy hunting group 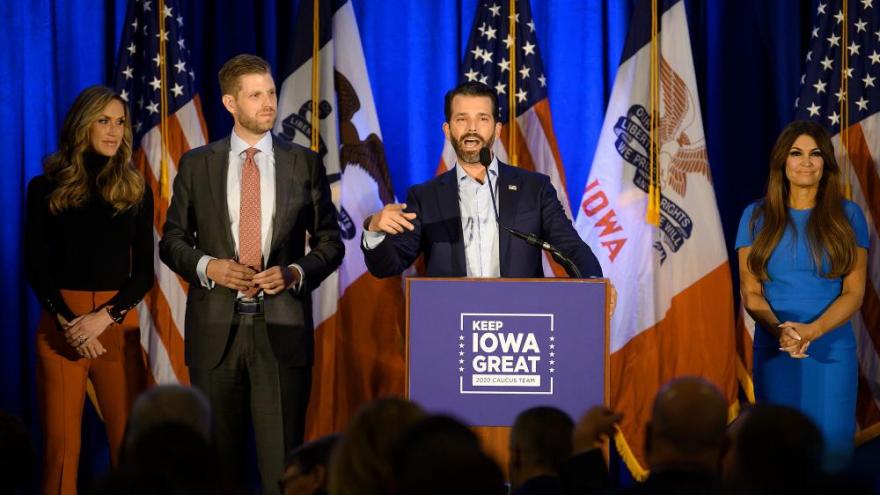 Donald Trump Jr. has been condemned by animal rights organizations for promising to take an auction winner on a seven-day hunting trip to Alaska, in a sale organized by a trophy hunting group. Seen here, Lara Trump (L), her husband Eric Trump (2L) and Kimberly Guilfoyle (R) listen to Donald Trump Jr. speak in Des Moines, Iowa, on February 3, 2020.

(CNN) -- Donald Trump Jr. has been condemned by animal rights organizations for promising to take an auction winner on a seven-day hunting trip to Alaska, in a sale organized by a trophy hunting group.

The yacht-based expedition will see Trump Jr., his son and the auction winner kill black-tailed deer and sea ducks, according to the auction site.

Bidding for the trip had surpassed $10,000 at the time of writing. The auction, hosted by Safari Club International (SCI), also includes trips to kill buffalo in Zimbabwe and to shoot an elephant in Namibia.

The expedition is set to take place in November -- the same month that Trump's father will seek reelection.

"This year we will be featuring Donald Trump Jr., a man who needs no introduction, and who's [sic] passion for the outdoors makes him the number one ambassador for our way of life," the listing reads.

Trump Jr. is an avid hunter, who regularly posts images of himself with weapons on his social media feeds.

Photos posted in 2012 by the website Gothamist show him holding an elephant tail, which the website said were from a 2011 hunt in Zimbabwe.

Trump has been condemned for those activities in the past by animal welfare groups, and many also criticized the sale by the SCI on Tuesday.

"Advertised as a 'dream hunt,' this hunting trip will be nothing but a nightmare for the Sitka black-tailed deer and sea ducks who find themselves in the gun sights of Donald Trump Jr. and whomever purchases this sick thrill," Jeff Flocken, president of Humane Society International, told CNN.

He added: "Killing for fun is not moral. And it's not conservation. Period."

The auction is timed to coincide with SCI's annual convention which begins on Wednesday in Nevada. Reports have suggested that Trump Jr. will speak at the event. CNN has contacted SCI and the Trump Organization for comment.

SCI campaigns against efforts to ban trophy hunting imports around the world and has argued that trophy hunting "helps wildlife and local economies."

In 2017, President Trump called trophy hunting a "horror show." But his administration has signaled an openness to allowing some big game trophy imports on a "case-by-case" basis, and last year approved the import of a lion trophy.

The decision to allow some imports came after a public backlash to the rollback of Obama-era restrictions on importing trophies of elephants and lions from some African countries by the Interior Department's Fish and Wildlife Service.

Trump Jr.'s spokesman, Andy Surabian, told CNN: "Don is looking forward to his speech about hunting and the importance of conservation at the Safari Club convention and is also proud to add Brian Wilson to the long list of liberal Hollywood elites who he has successfully triggered."

On Monday, Beach Boys founder Wilson urged fans to boycott a performance at the group's conference by his former band, saying he is "emphatically opposed" to trophy hunting.

He tweeted the link to a petition against the performance, adding that there was "nothing we can do personally to stop the show."