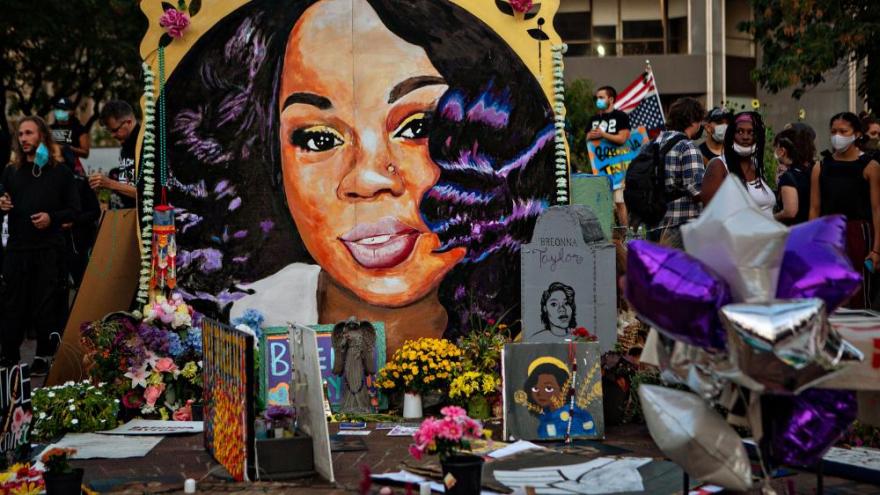 (CNN) -- The 26-year-old EMT and aspiring nurse was in her bedroom with her boyfriend when the Louisville Metro Police Department officers, in plain clothes, arrived just after midnight.

The officers, executing a narcotics warrant, told investigators they knocked and announced themselves before using a battering ram to bash the door to Breonna Taylor's South End apartment off its hinges that chaotic March night.

Her boyfriend, Kenneth Walker III, and his lawyer have maintained that he didn't know who was entering the Springfield Drive apartment and that he fired once. Kentucky's top prosecutor said Walker's round hit one of the officers, Sgt. Jonathan Mattingly, in the leg.

The officers unleashed a 32-round hail of return fire that killed Taylor and set off months of unrest in Louisville and other US cities.

A Kentucky grand jury last week did not indict any of the three officers directly involved in the raid on charges connected with Taylor's death. One officer faces charges for firing into an adjacent occupied apartment.

Mattingly and Det. Myles Cosgrove were not charged. Former Det. Brett Hankison was indicted on three counts of wanton endangerment in the first degree for allegedly firing blindly into Taylor's apartment. He has pleaded not guilty.

Audio from the secret grand jury proceedings released on Friday offers a glimpse into the confusion that reigned during the final moments of Taylor's life. Here are some highlights from the nearly 15 hours of recordings:

No official plan. No drugs.

Det. Herman Hall, an investigator with the state attorney general's office, told the grand jury he knew of no official plan for the officers in the botched raid.

A juror said Mattingly told investigators that officers had a formal plan, with specific roles, for executing a number of search warrants that night.

The juror asked if anyone had seen a formal plan that would back up Mattingly's account.

Hall told the panel the "only plan I have seen" was a whiteboard with addresses of locations to be raided and the names of officers involved in each.

Jurors can be heard murmuring that they had not seen the whiteboard. A photo of the board was shown to them. Hall pointed out that the address listed for Taylor was incorrect.

"Were drugs, money or paraphernalia recovered?" said Hall, repeating a question from a panel member.

"The answer to that is no. They did not go forward with executing the initial search warrant that they had for Breonna Taylor's apartment."

Another officer, Det. Michael Nobles, told the grand jury on September 21 that police believed Taylor was home with a small child.

"That's why we decided to knock -- it was a no-knock warrant -- but we wanted to give her time to, you know, warn the kids," Nobles said.

Hankison, in a recording played for the grand jury, told investigators that he wasn't supposed to work that night. He was not even part of the drug investigation.

Hankison handles a narcotics detection dog. He told investigators he volunteered for the assignment. The dog was left in a patrol car during the start of the raid.

The officers at Taylor's apartment that night were a "hodgepodge of people thrown together" -- who were not connected to the drug investigation, Hankison told investigators.

The officers were briefed minimally on the location about two hours before the raid, he said. It was considered a soft target and Taylor was not considered a threat.

"We were all kind of the older guys who were put with it because this was going to be the easy location," said Hankison, who is 44.

That's what Mattingly, in a recorded interview in March that was played for the grand jury, said happened in the first moments of the raid.

"At that point we started announcing ourselves," Mattingly said.

Mattingly told investigators that "our intent was not to hit the door." The officers, though, had a no-knock search warrant that would have allowed them to enter without announcing themselves as law enforcement.

"Our intent was to give her plenty of time to come to get to the door," he said.

Nobles told investigators that he knocked on the door and announced police for one to two minutes. He said one officer could hear movement inside.

After banging on the door six or seven times, Mattingly said, the decision was made to enter by force. A battering ram was used.

Mattingly said it took three strikes to knock the door off its hinges.

Walker, Taylor's boyfriend, told investigators he never heard anyone say "police" and that his and Taylor's shouts of "Who is it?" were met with silence, according to a CNN review of audio recordings of official statements in the case in July.

CNN interviewed several of Taylor's neighbors, either directly or through their attorney. Most said they were awakened by the gunfire and therefore did not hear what preceded it. Kentucky Attorney General Daniel Cameron has said one witness told investigators the officers had announced themselves.

"She's yelling at the top of her lungs — and I am too at this point — who is it?" Walker told investigators, according to the CNN review. "No answer. No response. No anything."

As Walker and Taylor made their way down a hallway toward the front door, he said, the door flew off its hinges.

"So I just let off one shot," he told investigators. "I still can't see who it is or anything."

Those were the words that Mattingly said officers yelled when they broke into the apartment, according to a recording of his interview with investigators that was played before the grand jury.

Mattingly was the first to lean inside. It was dark.

About 20 feet away the officer said he made out a man and a woman.

Mattingly told investigators the man stood in a "stretched-out position with his hand on a gun, and as soon as I clear (the doorway), he fires a gun."

"As soon as the shot hit, I could feel the heat in my leg. So I returned fire," he added.

"I've been hit!" Lt. Shawn Hoover recalled Mattingly saying, according to a recording of his March interview with investigators.

Colleagues dragged Mattingly, wounded and bleeding heavily from his thigh, out to a parking lot and used a belt as a tourniquet, Hoover said.

For a moment he could not hear.

"Everything was completely muted," Cosgrove said. "There was no sound."

He added, "I am positive that I had fired or was firing during those flashes, during that vivid white and black ... colors I was seeing."

Cosgrove told investigators he did not know how many times he pulled the trigger.

CNN has reached out to Cosgrove's attorney for comment.

The detective was one of three officers who fired their weapons. FBI ballistic tests determined a bullet from Cosgrove's gun killed Taylor, according to the attorney general.

"But these officers did not act in a reckless or unprofessional manner," Wicker said. "They did their duty, performed their roles as law enforcement officers and, above all, did not break the law."

Hankison allegedly blindly fired 10 rounds into Taylor's apartment through a covered patio door and window that prevented him from assessing any threat posed by the occupants before opening fire, according to authorities. Some rounds penetrated a neighboring apartment and endangered the lives of three occupants, according to the attorney general.

Stewart Matthews, an attorney for Hankison, told CNN on Friday that he hadn't received copies of the grand jury recordings but hadn't heard any "surprises" on news reports. CNN again sought comment from Matthews on Saturday.

Hankison, in the recording played for the grand jury, sounded emotional when he talked about Mattingly getting shot.

"All I could hear was the firing. I saw the flashing," he said. Hankison believed his colleagues were "being executed" as they rushed in to help the wounded officer.

The gunfire intensified. Hankison said he believed the officers were "all getting sprayed with bullets."

"My only option was to return fire and I did that to the muzzle flashes," Hankison told investigators in the interview played for the grand jury.

"And I want to be specific about this. I had already seen where the threat was. I saw where he was positioned in the hallway."

Hankison repeated several times that he saw a large figure -- in a military stance and holding what he believed was an AR-15-style rifle -- at the end of the apartment hallway. His colleagues were "sitting ducks," he said.

Walker dialed 911 on his cell phone. He sounded distraught and told the dispatcher someone had kicked in the door and shot his girlfriend.

The dispatcher peppered him with questions.

Walker moaned his girlfriend's nickname — "Bre" — over and over.

In the apartment, Walker was found unharmed.

Walker told officers at the scene that Taylor had opened fire on them, according to the Hankison's account to investigators.

Walker's attorney, Steve Romines, told CNN that Walker initially told officers that Taylor fired at them because he feared for his life. Romines said his client later admitted to firing a shot when he was interviewed at a police station.

Officers found Taylor on the ground beside Walker, bleeding profusely. There were bullet holes everywhere, including in a neighboring apartment where a young child lived, according to CNN's review of the case in July.

Taylor had five gunshot wounds, an investigator for the attorney general told the grand jury. One to the left upper breast killed her.