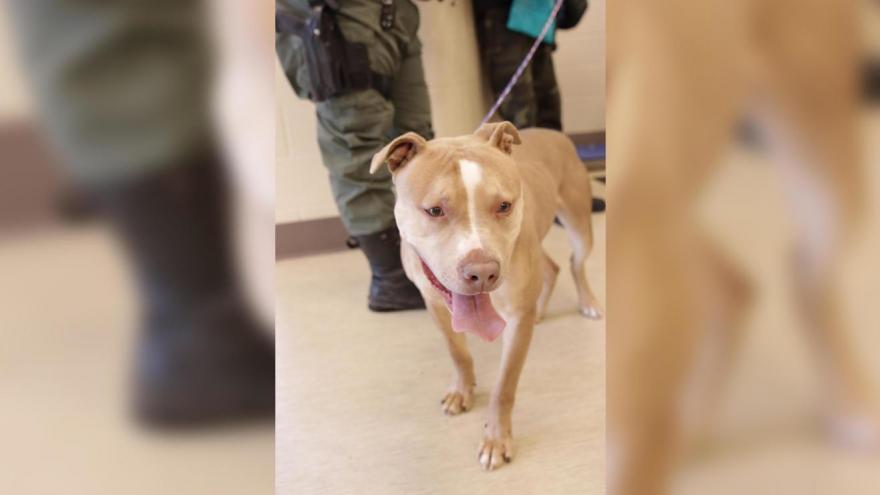 (CNN) -- A pitbull named Nipsey fell victim to his appetite when he ate a bag of crack cocaine that was thrown into his owner's backyard, Detroit police said.

Officers were executing a search warrant at a neighboring property on Wednesday when one of the suspects listed in the warrant threw a bag of crack cocaine over the fence, Detroit police spokesman Dan Donakowski told CNN. Nipsey was in the yard at the time.

Police heard Nipsey barking, Donakowski said, and when officers went to investigate, they discovered the bag of cocaine torn and chewed up. They immediately called the Michigan Humane Society (MHS) for assistance.

"When I came outside and saw him eating some dope from the house next door it kind of blew my mind," Clinton Majors, the dog's owner, said in a video shared online by MHS. "Definitely when you've got animals you really care for them."

After being alerted by the police department, humane society workers "rushed" to the property to pick up the dog and his owner.

"We dispatched two of our investigators to the home," Michigan Humane Society spokesperson Andy Bissonette told CNN. "We then transported Nipsey to our MHS Grosfeld Veterinary Center."

The 1-year-old puppy was held overnight for treatment. Once he recovered, he was finally reunited with Majors, who did not have to pay for Nipsey's medical care. MHS covered the costs.

Police were unable to determine which suspect was responsible for throwing the drugs into the yard, Donakowski said. No one was charged with anything related to the incident.

"I'm just happy the guys helped me out," Majors said of police and first responders. "This is what good people do."