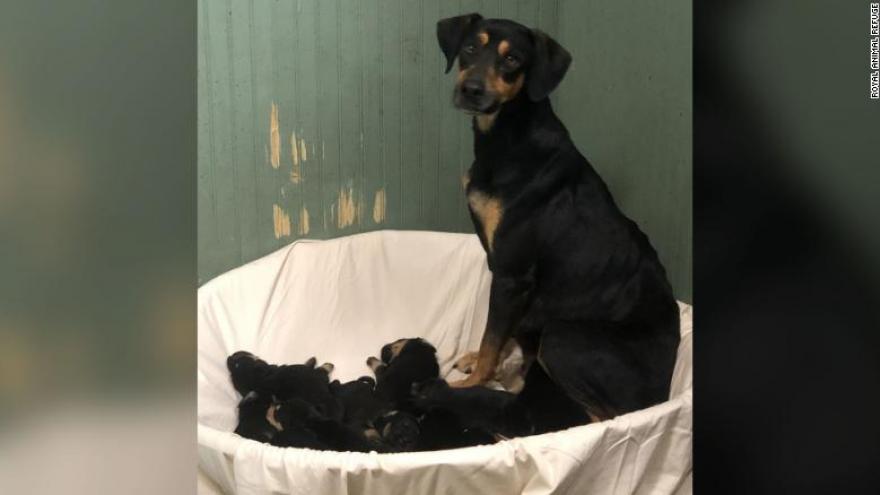 Clover was able to lead volunteers to a home where dead and abused animals were found. She and her 10 puppies are now safe.

(CNN) -- An emaciated female dog named Clover led animal shelter volunteers to a home in Georgia where her puppies, along with multiple dead and severely malnourished animals, were found.

Ashley Gresham, 27, was arrested and charged with six counts of aggravated animal cruelty on January 13 after six dead animals were found on her property, according to a Spalding County Sheriff`s Office incident report.

CNN could not determine if Gresham has a lawyer.

A dog, chicken, two ducks, and two rabbits were found deceased in their cages, the report said. Another dog who was found with a severe leg injury had to have his leg amputated.

The gruesome discovery was found after Clover led two volunteers with Royal Animal Refuge to her puppies. The animal shelter had been contacted after the emaciated female had been seen traveling with her puppies in the area. When the volunteers arrived, they were unable to catch Clover.

"She wasn't your typical apprehensive dog," Rebecca Tate, the founder of Royal Animal Refuge, told CNN. "It was more like she was telling them, "Hey, just come with me.' She kept stopping and turning around and waiting until they followed her."

Clover led the volunteers of the non-profit animal shelter to the property where they "smelled death" and, realizing something was wrong, called the sheriff's office, Tate said.

The volunteers found that Clover had torn open a cushion and made a bed for her 10 puppies. They also found four other dogs, including one with a broken leg that healed at an acute angle. That dog, now named Archie, had his leg amputated.

The four dogs are currently recovering from their injuries and learning to become accustomed to human interaction, according to Tate.

Clover and her puppies are now safe in a foster home where they are slowly recovering. The puppies will be available for adoption in about five weeks. In the meantime, the shelter is currently accepting pre-adoption applications.